Heat transfer in a gas or liquid by the circulation of currents from one region to another. A current in a fluid that results from convection, The Pacific Plate is floating, propelled by convection currents deep in the mantle.

Distinguish between conduction, convection and radiation:

Coefficient of thermal conductivity of good conductor by Searle’s Method;

Searle’s apparatus consist of a metal bar AB with cavities C1 and C2. One end and A of the bar is enclosed inside the steam chamber and other and B is wounded by a copper tube.

Thermometer T1 and T2 are fitted in cavities C1 and C2 respectively;

A and V is used to collect out coming water.

x is the distance between the cavities C1 and C2

A is the area of cross section of metal bar

K is the thermal conductivity and

T is the time where heat is flowing in to the bar.

M be the mass of water collected in t vessel V in time T. then amount of heat absorbed by water at end B in steady state is

Where s is specific heat capacity of water

Hence, from equation 1 and 2

From this relation we can calculate thermal conductivity of a good conductor.

The coefficient of thermal conductivity of a material is defined as the amount of heat flowing in one second across the faces of a cube of sides of unit length maintained at temperature difference of unit degree.

An expression for the thermal conductivity of a good conductor in steady state;

Experimentally it is found that under steady state condition, the quantity of heat Q flowing through the section of the bar is

Directly proportional to the temperature difference

Directly proportional to the time t for the heat follows

Inversely proportional to the perpendicular distance between hot and cold faces.

A perfect black body is the one which absorbs heat radiation of all wave lengths that fall upon it. Such a body neither reflects nor transmits the incident heat radiation and hence the body appears black. But when heated, it emits radiation which is called black radiation. The wave length range of emitted radiation is independent of the material of the body and depends on temperature of the blackbody. 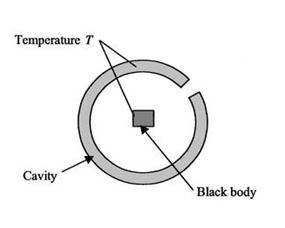 It states that the total amount of heat energy radiated per second per unit area of a perfectly black body is directly proportional to fourth power of its absolute temperature.

If E be the heat energy radiated per second per unit area by a black body of absolute temperature T1 Then,

If the body is not perfectly black, then

E is the emissivity of the body.

The heat energy radiated per second or power radiated by a body is given by,

The heat energy radiated per second per unit area by the black body is,

Heat energy absorbed per second per unit area by the black body is given by,

If body is not perfectly black, then

Heat transferred in solids by conduction;

Thermal energy is transferred from hot places to cold places by convection. Convection occurs when warmer areas of a liquid or gas rise to cooler areas in the liquid or gas. Cooler liquid or gas then takes the place of the warmer areas which have risen higher. This results in a continuous circulation pattern.

Woolen clothes have large layer of dry air in its texture. As air is bad conductor of heat. The air does not allow the heat produced in the heater, so woolen warmer than cotton clothes.

Mud houses colder in summer and warmer in winter;

The body must emit radiant energy at the same rate at which it absorbs, when a body reaches in thermal equilibrium with its surroundings. Hence, a body that is a good emitter must also be good absorber of radiation and vice versa.

Water in well cooler in summer and warmer in winter:

“Ventilations are provided near the ceilings in a room”:

Ventilations are provided near the ceilings in a room because hot vitiated air which always ascends towards the ceiling can escape more easily.

Three practical applications of thermal conductivity in everyday life are as

1.  Woolen clothes are warmer because they have fine pores filled with air.

2. Ice is packed in saw dust

3. In winter, iron chairs appear to be colder then the wooden chairs.