The coefficient of linear expansion:

The length changes by

Experimentally it is found that

Combining both we get,

The coefficient of cubical expansion:

Relation between α and γ

The volume of the cube at θ2 is

Combining both we get

Coefficient of real and apparent expansion of liquid:

Coefficient of real expansion is defined as the ratio of the real increase in volume of the liquid to the original volume per unit rise in temperature. It is denoted by γr.

Coefficient of apparent expansion is defined as the apparent increase in volume of the liquid to the original volume per unit rise in temperature. It is denoted by γa.

Relation between coefficient of real and apparent expansion of liquid;

Let consider a glass vessel of volume V filled with some liquid at the temperature θ1. When the liquid is heated to θ2, its expands and its real increase in volume is

Similarly apparent increase in volume of the liquid,

And increase in volume vessel,

This is the required expression

The difference in expansions of different substances when they are heated through the same range of temperature is called the differential expansion.

If the length of material chosen that then

In winter, when water trapped in a pipe cools further from 4oC – 0oC, it freezes. The water on cooling from 40C – 0oC expands considerably due to anomalous expansion of water. But the size of the pipes contract due the fall in temperature. The expansion in volume of water in the ice gives outward pressure in the pipe due to which the pipe bursts.

A simple method to determine the coefficient of real expansion of a liquid is Dulong and Petiti;s experiment. 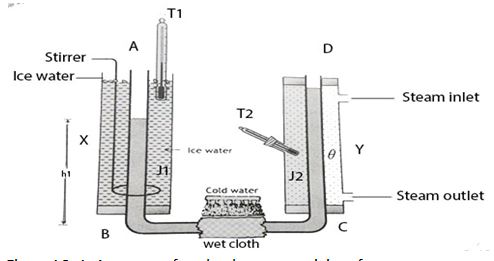 In the experiment, the thermometer T1 and T2 will show the constant temperature when the steady temperature is reached. Suppose, ρ1andρ2be the densities of liquid h1 and h2 be the height of liquid in tube AB and CD in equilibrium position

B and C are in same horizontal level at equilibrium

From values of h1, h2, θ1andθ2 an absolute expansivity of the liquid is determined.

Anomalous expansion of water and what is its significance in nature;

Through most liquids expand on heating and on cooling, water has a different behavior. Water has a peculiar property. When temperature is rises between 0 to 4°C water is not going to expand but it is going to contract. This special property is called anomalous expansion of water. It is because of the molecular configuration of the water. When the temperature is decreased from 4°C to 0 degrees centigrade water does not contracts but expands. Therefore at 4°C volume of the water is minimum and the corresponding density is maximum. It is obvious that at 4°C density of the water is going to be maximum as the volume is minimum. Such expansion of water from 4°C to 0 degrees centigrade is called anomalous expansion of water. 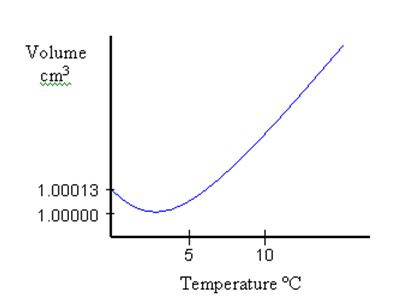 Figure16_2: Graph between volume and temperature

The expansion of water has an important bearing on the preservation of aquatic life during very cold weather. As the temperature of a pond or lake falls, the water contracts, becomes denser and sinks. A circulation is thus set up until all the water reaches its maximum density at 4°C. If further cooling occurs any water below 4 °C will stay at the top owing to its lighter density. In due course, ice forms on the top of the water, and after this the lower layers of water at 4°C can lose heat only by conduction. Only very shallow water is thus liable to freeze solid. In deeper water there will always be water beneath the ice in which fish and other creatures can live.

Clocks slow in summer and fast in winter;

In summer, the length of the pendulum increases due to thermal expansion and hence time period increases. The clocks thus run slower.

Water level fall initially in a vessel when it is heated;

When a vessel containing water is heated, the vessel receives heat earlier than water, As a result at first expansion of the vessel takes place and hence initially the water level falls in a vessel.

Effect of temperature on density of liquid;

When temperature of a substance is increased, its volume increases, As the density is inversely proportional to the volume, the density of the substance changes due to change in volume.

The relation between linear, superficial and cubical expansivity:

The relation between linear, superficial and cubical expansivity is given as,