The Second Law of Thermodynamics states that the state of entropy of the entire universe, as an isolated system, will always increase over time. The second law also states that the changes in the entropy in the universe can never be negative.

Following are the statements of second law of thermodynamics:

(i) All spontaneous process is irreversible in nature.

(ii) The net entropy of the universe in any natural process always increases and tends to acquire maximum value.

The petrol engine was developed by Otto in 1877 and hence it is also called Otto engine. This engine consists of a cylinder fitted with the piston. 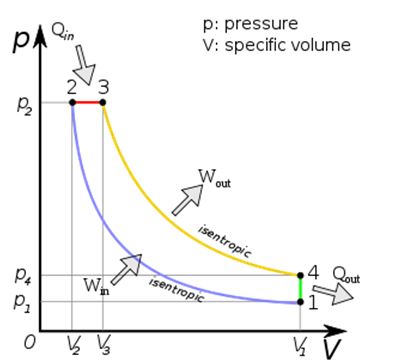 A heat engine with 100% efficiency is only a theoretical possible:
If Q1 is the amount of heat absorbed from the source and Q2 be the heat rejected to the sink, then the efficiency of the heat is given as

Merits and demerits of petrol engine:

Petrol engine is very suitable for use in cars, scooters and airplanes because its size is small and light in weight. Its efficiency is quite high as compared to that of the steam engine. This engine is practically smokeless. Due to the high cost of petrol, the running of this engine is expensive.

If Q1 is the amount of heat absorbed from the source and Q2 be the heat rejected to the sink, then the efficiency of the heat is given as

Since Q1> Q2, the efficiency, ɧ is always less then unity.

If Q1 is the amount of heat absorbed from the source and Q2 be the heat rejected to the sink, then the efficiency of the heat is given as

Since Q1> Q2, the efficiency, ɧ is always less then unity. No engine will convert all the heat absorbed from the source in to work. So heat cannot be completely converted into mechanical work.

The efficiency of a heat engine relates how much useful work is output for a given amount of heat energy input.

From the laws of thermodynamics: 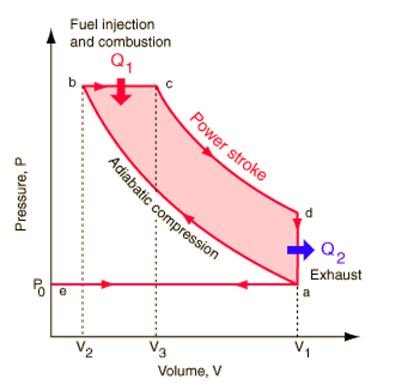 PV-diagram of the diesel engine

The ideal air-standard cycle is modeled as a reversible adiabatic compression followed by a constant pressure combustion process, then an adiabatic expansion as a power stroke and an iso-volumetric exhaust. A new air charge is taken in at the end of the exhaust, as indicated by the processes a-e-a on the diagram.

The working substance is subjected to a cycle of four operations consisting of two isothermal processes and two adiabatic processes. Such a cycle is called Carnot cycle.

Efficiency of Carnot’s engine is defined as the ratio of external work done, which is given by

The Carnot cycle when acting as a heat engine consists of the following steps: 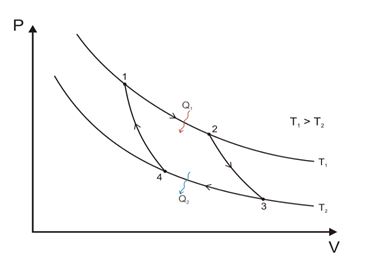 PV-diagram of the Carnot cycle

1. Reversible isothermal expansion of the gas at the "hot" temperature, T1 (isothermal heat addition or absorption). During this step (1 to 2 on Figure 1, A to B in Figure 2) the gas is allowed to expand and it does work on the surroundings. The temperature of the gas does not change during the process, and thus the expansion is isothermal. The gas expansion is propelled by absorption of heat energy Q1 and of entropy  $\Delta {\rm{s}} = \frac{{{\rm{Q}}1}}{{{\rm{T}}1}}$ from the high temperature reservoir.

2. Isentropic (reversible adiabatic) expansion of the gas (isentropic work output). For this step (2 to 3 on Figure 1, B to C in Figure 2) the mechanisms of the engine are assumed to be thermally insulated, thus they neither gain nor lose heat. The gas continues to expand, doing work on the surroundings, and losing an equivalent amount of internal energy. The gas expansion causes it to cool to the "cold" temperature, T2. The entropy remains unchanged.

3. Reversible isothermal compression of the gas at the "cold" temperature, T2. (isothermal heat rejection) (3 to 4 on Figure 1, C to D on Figure 2) Now the surroundings do work on the gas, causing an amount of heat energy Q2and of entropy $\Delta {\rm{s}} = \frac{{{\rm{Q}}2}}{{{\rm{T}}2}}$ to flow out of the gas to the low temperature reservoir. (This is the same amount of entropy absorbed in step 1, as can be seen from the Clausius inequality.

4. Isentropic compression of the gas (isentropic work input). (4 to 1 on Figure 1, D to A on Figure 2) Once again the mechanisms of the engine are assumed to be thermally insulated. During this step, the surroundings do work on the gas, increasing its internal energy and compressing it, causing the temperature to rise to T1. The entropy remains unchanged. At this point the gas is in the same state as at the start of step 1.