Respiration can be defined as biochemical process by which foods are oxidized to liberate energy. Overall respiration involves two processes.

It occurs in all higher forms (organisms) in this type Oxygen is necessary.

There is a pair of spongy conical hollow bags enclosed in pleural cavities called lungs. The plural cavities are lined by tough, flexible and transparent membranes called pleura. The plura is double walled. The outer membrane is parietal and inner membrane is visceral membrane. These membranes protect lungs and stop leaking of air into thoracic cavity. The fluid secreted by pleura reduces the friction during breathing movement. The lungs are capable of great expansion. They are inflated when filled with air. These are found in either side of heart. The right lung has three lobes and left lung has two lobes. The three lobes of right lung are right superior, right inferior and middle lobe. The two lobes of left lung are left superior and left inferior. The left lung has cardiac notch at its anteromedian border to accommodate the heart. There are about 750 millions of alveoli. These large no. of alveoli provide about 100 sq meter of surface. It is about 50 times of skin surface. Alveoli are extremely thin walled and vascular structure surrounded by capillary of network. These are the site for gases exchange. 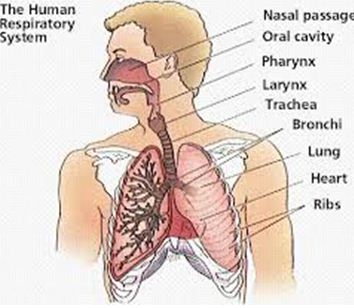 Breathing is simply taking in of fresh air from atmosphere and giving out of used air from lungs. Breathing renews constantly the air present in the lungs. It is accomplished through changes in the volume and air pressure of the thoracic cavity. Change in volume and air pressure is carried out by movement of ribs, internal and external intercostals muscles, diaphragm and abdominal muscles. Breathing can be divided into inhalation and exhalation. One breath includes one inspiration or inhalation and one expiration of exhalation. The respiratory rate is the no. of breaths taken per minute. At rest, for a normal person, it is equal to 12 to 14 breaths per minute. The pulmonary air volume during breathing is measured by an apparatus called Spiro meter. 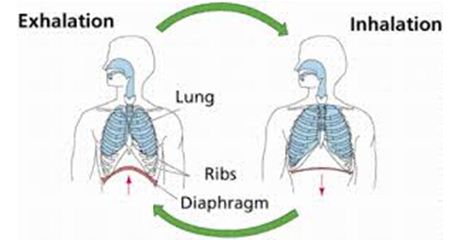 1.Taking in of atmospheric air

5.Increase in the volume of thoracic cavity.

7.Rushing in of air through nostril into alveolar sacs causing inflation of lung.

1.Giving out of air from lungs.

2.Relaxation of external intercostals muscle and contraction of intercostal  muscle.

5.Decrease in volume of thoracic cavity.

6.Increase in the air pressure.

7.Expulsion of air from lungs into atmosphere causing deflation of lungs.

Exchange of gases in lungs:

The air inhaled by inspiration comes to alveoli. All around the alveoli there is a network of blood capillaries. These capillaries are extremely fine tubes with only one layered wall. The deoxygenated blood collected from different parts of the body is at first brought to the heart, and from here pumped out to the lungs. This blood which may also be called venous blood is sent to the lungs where it has to pass through the network of capillaries around the alveoli. The oxygen from the alveolus diffuses out into the blood capillary due to difference in partial pressures of oxygen and is picked up by the hemoglobin molecules present inside the red blood corpuscles. Again, carbon dioxide, which is in greater amount in the venous blood, comes from the capillary into the alveolus.

Physiology of respiration can be studied under following headings.

External respiration: It is uptake of O₂ and release of CO₂. It takes place in the lungs called breathing.

Transport of O2 by blood:

The maximum carrying capacity of O2 due to hemoglobin expressed in the graph oxygen dissociation curve. 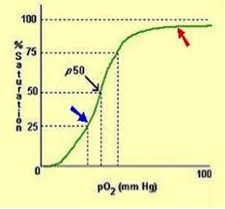 Carbon dioxide is one of the poisonous  gas which by any means should be elimate from the body. It is slightly soluble in water convert in to carbonic acid. After the exchange of gases CO2  eliminate mainly by 3 ways; 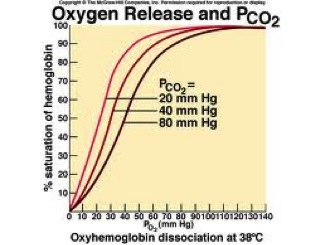 1.In the form of carbonic acid:

CO₂ dissolve in water of blood plasma to form carbonic acid, about 7 % of total CO₂  carried in this way.

2.In the form of bicarbonates of Na and K:

3.By RBC in the form of carbamino compounds:

Amino acid present in RBC get oxidized to release amino group and carboxyl group. Carbon dioxide combines with amino group to form carbamino compounds. About 23 % is transported in this form.