It is a natural phenomenon by which organism reproduce young ones of their  own kinds for continuation of race. Human beings are unisexual or dioecious i.e. male and female reproductive system is separated in separate individual. 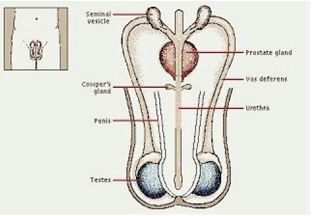 1.Testes: These are pinkish-oval lie inside the scrotum. The scrotum lies outside the abdominal cavity. So that temperature of testes remains 2.30c below than temperature of body. Which is needed to produces sperm. 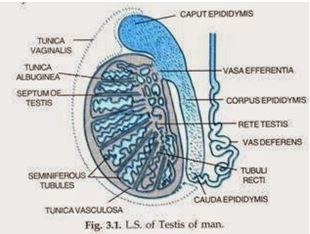 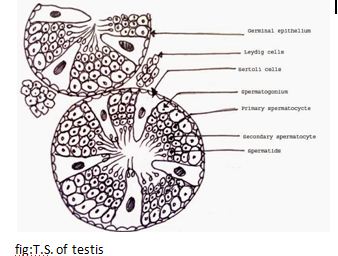 There are 200-300 testicular lobules in testis. Each lobule is composed of 1 to 4 coiled seminiferous tubules. The tubules are lined with germinal epithelial cells (spermatogonia).These epithelial cells produce sperms by the process of spermatogenesis. Sertoli cells supply nourishment to develop sperms.

There are interstitial cells (cells of leydig) in between seminiferous tubules and connective tissue. The interstitial cells produce androgens, which promotes development of male accessory glands and controls male sex features (moustache, beard, change of voice)

It is funnel like convoluted about 6 meters long tube. Board part of anterior epididymis is called caput epididymis. Middle narrow part is corpus epididymis posterior end is cauda epididymis.

Store the sperm and secrets fluid to nourish sperm.

There  are two short formed by the union of duct from a seminal vesicle and vasa deferens, there carry the mixture of sperm and secretion of seminal vesicle.

It is 20 cm long arises from urinary bladder. It discharges urine and semen both.

It is copulatory organ of human. It is made up of three columns of spongy tissues (two dorsal cavernosa and one ventral corpora spongiosum). Enlarged-tip of penis is called glans penis which is highly sensitive. Penis deposits the semen in vagina with spermatozoa.

These are two pouches like below-posteriorly of urinary bladder and opens into ejaculatory duct.  These secret and expel a viscous fluid which keep sperms alive.

It lies behind urinary bladder. It is secretes thin milky substance occupy about 30% volume of semen.

The paired glands lie below the prostate glands. Their alkaline secretion lubricates the semen flow.

Erection is caused by dilation of blood vessel of blood vessel resulting collection of more blood spaces of spongy tissue. About 3ml of semen is discharged by penis in each ejaculation during copulation.

There is one pair of about 3.5cm long, pink, almond shaped and situated in

abdominal cavity on either side of vertebral column. Each kidney is attached with ovarian ligament and body wall with mesovarian fold with ovaries. Internally each          ovary is differentiate with

iii.Stroma: Inner mass of connective tissues made up of cortex medulla.

When Graafian follicle liberates ovum it is called corpus luteum. The corpus luteum secrete progesterone hormone in the influence of luteinizing hormone. The hormones thicken the endometrium wall and activate the mammary gland for their development. 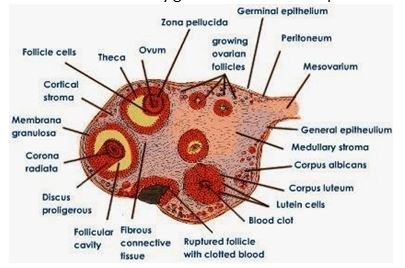 2.Fallopian tubes (oviducts): these are ciliated tubes of 10-20cm long arise from uterus.

It has four parts:

4.Vagina: It is female copulatory organ. It is tubular, about 10cm long. It passage for menstrual flow and receptor of spermatozoa. In virgins the vaginal orifice is partially covered by hymen membrane.

5.Vulva: It is external genitalia it is consists of mons pubis (hair part) clitoris (erectile organ) labia major a (inner fold of vulva). Libia minora have in more number.

These consists of Bartholin’s glands and mammary glands.

These are two bean-shaped lie on either of side of vaginal orifice These glands secret viscid fluid for lubricant of vulva during sexual intercourse and sexual excitement.

These are pair rounded with median nipple. Each gland made up of 15-25 lobules of milky glands. Each gland sends a lactiferous duct toward nipple. Milk gland produce milk under the control of prolactin and ejection of milk is controlled by pituitary gland.

It is cyclic changes occur in reproductive tract of human female on a period of 28 days. It is confirmed by loss of vaginal blood. It occurs at about 13 years of age till the age of 50-55 years. The menstruation is seen in human monkeys, gorilla etc. The menstrual cycle is categorized into three phases;

It is the phase of blood flow. It last for 3-5 days. It is caused due to cast off epithelia lining of endometrium. Oestrogen and progesterone is very law in the blood. Menstruation is observed only when ovum remains unfertilized.

2.The release of FSH from pituitary stimulates the development of follicles of

which increases up to 12th days.

4.Oestrogen enhances proliferation of cells of endometrium of uterus and

fallopian tubes (up to 2-3mm thickens). The wall is highly supply with blood

vessels and ready for implantation.

3. Secretory or luteal or ovulatory phase

3.LH and FSH stimulate the ovulation (releases of ova).so that LH and FSH

concentration become high at this time.

5.Progesterone inhabits maturation of any follicle and ovulation.

6.Progesterone stimulates thickening of endometrium for implantation of zygote.

It is phase of women’s life. It occurs between 50 to 55 years. At that age ovaries

are less responsive to FSH and LH. Ovulation and menstrual cycle becomes irregular and stop. After the menopause female loses the ability to reproduce progesterone and oestrogen hormone becomes imbalance.