b. Peer to Peer Network

a. A computer network is a logical or physical interconnection between two or more computers such that they could communicate with each other.

The advantages and disadvantages of computer network are as follows:

i. A computer networked environment allows faster, easier and reliable transfer of data files from one computer to another.

ii. A network computer allows sharing of networked connected peripherals and simultaneous access to programs and data irrespective of the physical location of the resources and the user.

i. Computer network faults can cause loss of data and resources.

ii. Proper maintenance of a network computer requires a considerable time and expertise.

The hardware and software of computer network are as follows:

i. Computer systems (servers or clients) = A server is a computer designed to process requests and deliver data to other computers over a local network or the Internet.

ii. Connectors = The connectors are used to connect network cables to terminals or other devices. The type of connector depends on the cable types or devices used in the network.

iii. Network Cables = Network cables are the medium through which the information moves from one network to another network

iv. Network Interface Card (NIC) = It is a computer circuit board that is installed on a computer so that it can be connected in a network.

ii. Network Protocol = Network protocol is a formal description of message formats and the rules that two or more machines must follow to exchange those messages.

c. Each computer on any types of network needs a hardware component to control the flow of data. The device that performs this function is Network Interface Card (NIC), commonly called network card.

d. Protocols are the sets of rules that the computer on the network must follow to communicate and to exchange the data with each other. Some of the popular network protocols are as follows:

e. It is a type of network in which each computer in a network is either a client or a server. It is an arrangement where some programs, files or other resources located on one computer called the server but are available to other systems on the network, called clients. 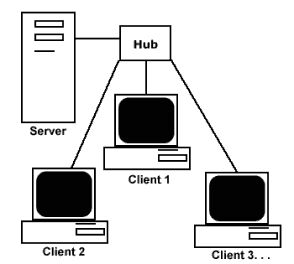 f. Peer to peer network is a type of decentralized and distributed network architecture in which individual nodes in the network acts as both suppliers and consumers of resources in contrast to centralized client server model. 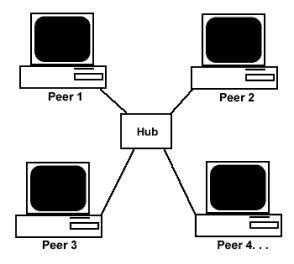 g. Difference between LAN and WAN are as follows:

h. A network topology refers to the shape of the network in which all the computers are connected together.

The different types of network topologies are as follows:

i. Ring topology is a network topology in which each node connects to exactly two other nodes, forming a single continuous pathway for signals through each node â€“ a ring. Data travel from node to node with each node along the way handling every packet. 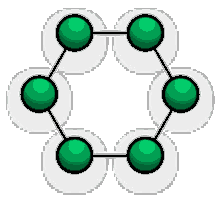 j. A router is a device used to connect networks that use different architectures and protocols. It can switch and transfer packets of information across multiple networks. This process is called routing.

k. A communication media is refers to any form of media that is primarily used for the transfer of signals. They are the physical pathways over which data travels from a sending device to a receiving device in a telecommunication system.

m. Modem is the short form of Modulator-Demodulator. This is a device used to transfer data of one computer to another using telephone lines. During the modulation phase, it is used to translate digital signals of a computer to another signal, which are then transmitted across the standard telephone line. The reverse takes place during its demodulation phase, as the MODEM receives analog signals from a phone line and converts them into digital signals for the computer.

Microwave signals are similar to radio and television signals and are used to transmit data through the space without the use of cables. Microwaves signals provide very high speed transmission. These signals cannot bend or pass obstacles like hill, towers and should be in a line of sight.

It is a mode of transmission in which communication takes place between two stations in only one direction at a time. There is no return path. Radio and television broadcasts operate in simplex mode.

A term used to describe the data handling capacity of a communication system is called a bandwidth. Bandwidth is the range of frequency that is available for the transmission of data. Bandwidth is measured in bits per second (bps).