Our Traditional, Social Values and Norms

Our Tradition, social Values and Norms:

Custom is a common habit and tradition is a belief. Ours customs, traditions and our whole lifestyle are highly influenced by religious beliefs. In a similar manner, our social values and norms are also guided by religion. Unique ways of life have developed in Nepal. These, in turn, have given rise to different types of customs and traditions in the country. For example, Nepalese do not shake their hands like westerners to greet each other; they instead place their palms together with the fingers up in front of their chest or chin and say “Namaste” or "Namaskar" to superiors. 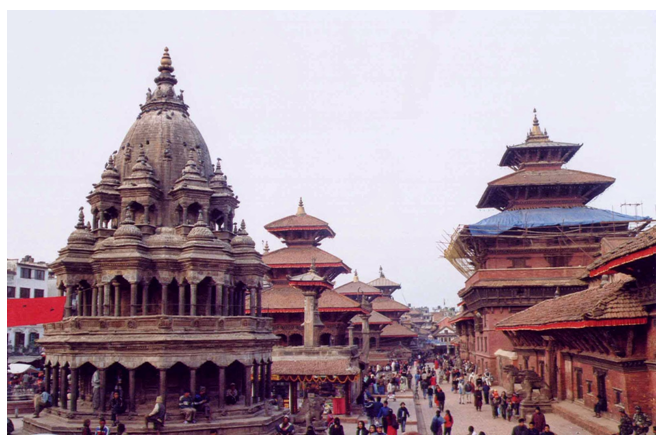 There are ten heritages of Nepal that are listed in the World Heritage List. Among them two of the heritage sites are important naturally. Similarly other eight sites are important either historically or culturally and religiously. Talking about the naturally important sites, they are Sagarmatha National Park and Chitwan National Park. Sagarmatha National Park includes the highest peak of the world along with very precious flora and fauna. Chitwan National Park is famous for one horned rhinosceros. Out of ten places seven of them lies within the Kathmandu valley and the rest lies outside. Apart from those two National Parks Lumbini lies out of the Kathmandu valley. Lumbini, the birthplace of Gautam Buddha is very important place. Various Buddhist countries of the world have made their monastries in Lumbini.

Swayambhunath Temple and Bouddhanath stupa are the Buddhist pilgrimages that lies in the World Heritage Site from Kathmandu valley.

Nepal is rich in folk songs. Folk song are the mirror of the society. The happenings of the society come truly in the folk song. Therefore folk song represents the place of the culture and the contemporary society. Songs like hariyo dandha matho halo jotne sathi reflects the nepali traditional way of ploughing the field before the plantation of crops. Similarly songs like asare maina ma pani paryo rujhaune eklo yo mero man kasari bujhaunereflects the contemporary society where the youth go to abroad to earn for the livlihood.

Dohori music is one of Nepali folk songs. Dohori means from two side or a debate. This debate is in rhythm, and involves quick and witty poetry. The two teams in Dohori usually involve boys in one group girls in the other. The song is started with a question usually from the boys' side. The girl follows the question with a quick response and continues the musical conversation.

Jhalakman Gandharva is the famous Nepali Folk Singer. He has contributed a lot in the field of Nepali Folk song. He is not only the singer rather he is a great lyricsist and musician. His contribution is praiseworthy.

Panche Baja is the typical and traditional type of set of musical instruments which have been played in the weeding ceremony of the Nepalese people. But due to westernization and modernization the Nepalese traditional musical instrument is getting extinct in the urban areas. But we need to be aware that if the western band will put its impact in village area then our next generations will only read about the Nepalese Panchai Baja in their history books. In such condition we need to take the initiation of the preservation of the Nepalese Panchai Baja. In the weeding ceremonies this should be brought into practice and preserve our very important asset and our culture and tradition. If all the community will seriously implement this then Nepali Panchai Baja will be preserved. The name of Nepalese Panchai Baja with their brief introduction is listed below.

Sahanai: it is made of metal shaped like a pipe slightly bent forward has a couple of holes, a reed on top that you blow into.

hyali/Jhymta/Jhurma (Cymbal): It is a couple of flat round dish-like musical instrument made of brass or bronze, played by hitting each other.

Damaha/Nagara (Drum): It is made of leather stretched over the end of a hollow copper bowl played by hitting with sticks.

Dholak : It is a kind of large drum like Madal made of a hollow wood by stretching leather over both edges and played wuth hands.

Tyampko: It is also like the Damaha but smaller in size and played by two pieces of stick called Gajo.

Songs and dances are complementary to each other. Definitely without the presence of one, another is meaningless as it cannot give the true flavor of entertainment. If there is a beautiful song and music but no dance then that is of no importance. Similarly if there is dance but no song then that is also like tea without sugar which is of no taste. So both song and dance should go together to take the taste of tradition.

Dhan Nach is the dance which is performed b holding the hands in the social occasions of fairs and festivals. This dance is related to Limbu caste. However Rais also perform this dance.

1. Children’s Day
29th Bhadra is as Children’s Day. Children’s Day is the day when Nepal has signed and approved the protocol passed by UN Convention on Child Rights. Nepal Children’s Organization and Bal Mandir organize various programmes throughout the country on that day.

3. Martyrs’ Day
Every year on 16th of Magh Nepalese people observe Martyrs’ Day. They observe Martyrs’ Day in the memory of four martyrs named Shukra Raj Shastri, Dharma Bhakta Mathema, Ganga Lal Shrestha and Dashrath Chand and others who sacrified their life to end the autocratic Rana regime and established democracy in Nepal.

4. Democracy Day
The Rana rule was ended and democracy was introduced on 7th Falgun 2007 BS. To remember that day, every year on 7th of Falgun, Nepalese people observe Democracy Day.

6. Education Day
Every year on World Literacy Day Nepalese People observe Education Day in Nepal. Education Day falls on 8th September. Those who have given great contribution in the field of education are awarded by various prizes on this day. Similarly, who has done Ph.D., topped in Masters, Bachelor and other levels are given medals by the head of the state.

Helen Keller was born on June 27, 1880 in Tuscumbia, United States of America. She was admitted to the school for blind children at the age of seven. Her teacher Anna Sullivan brought tremendous change in her life. She became the first graduate from among the blind and deaf in 1904 AD. Her book â€œThe story of my lifeâ€ became very popular throughout the world. She has established many institutions and organizations for the welfare of the deaf and blind people. She was a very good social worker.

Stephen Hawking was born in Oxford City, England in January 8, 1942. He was born normally but the dreadful neurological disease made him bed ridden. He obtained school education from an ordinary private school and accomplished higher education from Oxford University up to research level. Stephen Hawking became an established scientist of the world and brought his ideas through the book entitled â€œA Brief History of Time. He has contributed a lot to the modern science through his hard work and his continuous effort. 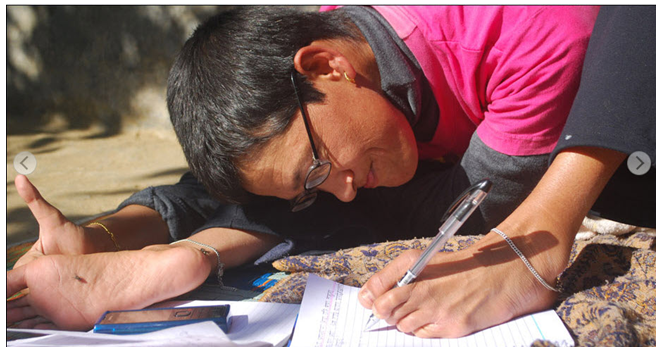 Jamak Kumari Ghimire is a lady born in Dhankuta district of Nepal. She is also a disable lady but her contribution to Nepali Literature is great. She didnâ€™t go to school but she learned to read and write from the books and copies of her brothers and sisters. She struggled a lot to read and write becaue she could not move her hands and legs except her left leg. She uses her left leg to write and do other works. She won madan puraskar for her book Jivan Kanda Ki Fool. Her contribution to Nepali literature is great. She has been in incredible lady and has set an example of all other people.