Power of accommodation of eye;

That is, the healthy eye is able to assume both a small and a large focal length; it would have the ability to view objects with a large variation in distance. The maximum variation in the power of the eye is called the Power of Accommodation.

Near point- it is the nearest possible distance from our eye till which we can see an object clearly. It is 25 cm in human.

Far point- it is the range till where our eyes can see and in a normal human being it is infinity.

The inability to see things clearly unless they are relatively close to the eyes, owing to the focusing of rays of light by the eye at a point in front of the retina. The light focuses in front of the retina (they are short-sighted). This means that they cannot see things clearly if they are far away from them. This can be corrected by using a diverging lens of a suitable focal length.

A stop in photography nomenclature means a difference of one exposure value, which is the doubling, or halving, of the amount of light reaching the sensor. There are a few standard "full stops" that f-numbers are rated in (1, 1.4, 2, 2.8, 4, 5.6 …)

Working of a simple microscope and the expression for its magnification;

A simple microscope is used to obtain small magnifications. It is usually used for study of microscopic algae, fungi and biological specimen.Light from a light source (mirror) passes through a thin transparent object. A biconvex lens magnifies the size of the object to get an enlarged virtual image. The image is viewed from the other side.

The most commonly used microscope for general purposes is the standard compound microscope. It magnifies the size of the object by a complex system of lens arrangement.

It has a series of two lenses; (i) the objective lens close to the object to be observed and (ii) the ocular lens or eyepiece, through which the image is viewed by eye. Light from a light source (mirror or electric lamp) passes through a thin transparent objects. 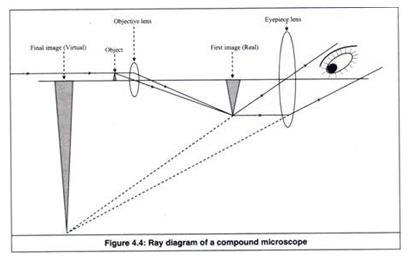 The objective lens produces a magnified ‘real image’ first image) of the object. This image is again magnified by the ocular lens (eyepiece) to obtain a magnified ‘virtual image’ (final image), which can be seen by eye through the eyepiece. As light passes directly from the source to the eye through the two lenses, the field of vision is brightly illuminated. That is why; it is a bright-field microscope.

It is an optical instrument used to view heavenly bodies such moon, stars, planets and distant objects.

The angular magnification of telescope is given by

This is required relation.

An erect image is produced in a terrestrial telescope:

Terrestrial telescope uses a positive objective and a negative eyepiece. It gives erect images and is shorter than the astronomical telescope with the same power. Its angular magnification is -fo/fe.

A reflecting telescope uses a curved mirror, light refracted from it is converged at the eyepiece with the help of other mirrors and the telescope is free from chromatic aberration and spherical aberration.

Newton’s telescope and explain its working:

Curved mirrors can bend light and make parallel light rays converge to a focus. This focus is directly in the path of the incoming light, so there are several ways of making images from the mirror visible. One is called a Newtonian reflector, where a flat mirror is used to point the light rays out to an eyepiece

Working of a photographic camera; 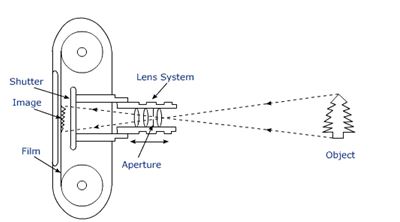 The first photographic camera developed for commercial manufacture was a :uerreotype camera, built by Alphonse Giroux in 1839. A photographic camera consists of a converging lens system at least one end of a box and a light sensitive film at the other end, a focusing device for adjusting the distance of the lens from the film and an exposure arrangement which provides the correct exposure. The object is placed in such a way that a real inverted image of the object is formed on the film. The amount of light entering the film region can be adjusted by adjusting the aperture of the lens.The lens system contains an achromatic doublet and separated lenses, which can minimize chromatic aberration. The box is painted black inside to avoid unnecessary reflection inside.A shutter is placed between the lens and the film. When a photograph is taken, the shutter opens and closes quickly, thereby exposing the film to light for a short time to light entering the camera. The sensitive photographic film is coated with a chemical emulsion of silver halogen compound, which is very sensitive to light. The film is mounted with the help of film spooks.A sharp image of the object is focused on the film by adjusting the distance of the lens from the film. There is a focusing ring, which turns over a scale engraved on the lens. By means of this ring, the distance between the lens and the film can be adjusted by moving the lens forward and backwards.The film speed is a measure of how quickly the film will be exposed when in use. A fast film needs a relatively short time exposure while a slow speed film needs somewhat longer time.Most of the cameras have a viewfinder, which helps the user to see what the camera sees before exposing the film.The lens aperture is generally expressed as the fraction of focal length 'f of the lens. When the lens is focused for a certain distance, the different parts of the object at that distance are sharp and the other points look blurred circles called the 'circles of confusion'.

Eyes are organ of the sight approximately 2.5cm in diameter. It is composed of three layers. They are: sclera, choroid and retina. It consists of two types of muscles called irish and ciliary muscles. Irish helps to regulate the amount of light entering the eyeball whereas ciliary muscles helps to focus light at the retina by contraction and relaxation of the ligaments attached to the ciliary muscles. 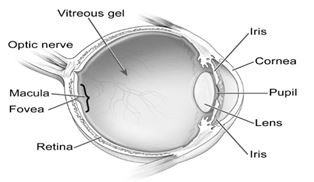 Far and near points of eye: For a normal eye, far point is infinity and near point is 25 cm from the eye. When an eye cannot focus the light at the retina, the object cannot be seen clearly. Such defects of eyes vision observed in human eye are as Myopia or Hypermetroypia.

1. Myopia: This can be corrected by using a diverging lens of a suitable focal length.

2. Hypermetroypia: A convex lens is needed to correct this defect.

A telescope used for observing terrestrial objects, which gives an image that, is not inverted.

Terrestrial telescopes are optical viewing devices primarily designed to look at objects on Earth, rather than in the night sky. There are several key differences that distinguish these telescopes from the more-common astronomic models; though some combination versions do existTerrestrial telescope contains three lenses as compared to the astronomical telescope. It is also known as the spyglass. It produces a final erect image this obtained when a convex lens of suitable focal length is adjusted between the objective and eyepiece of an astronomical telescope.

The contrast the optical arrangement of human eye and those of a photographic camera, including:

1. A diaphragm to control the amount of light that gets through to the lens. This is the shutter in a camera, and the pupil, at the center of the iris, in the human eye.

2. A lens to focus the light and create an image. The image is real and inverted.

3. A method of sensing the image. In a camera, film is used to record the image; in the eye, the image is focused on the retina, and a system of rods and cones is the front end of an image-processing system that converts the image to electrical impulses and sends the information along the optic nerve to the brain.

Compare a refracting telescope with a reflecting;

A refracting or refractor telescope is a type of optical telescope that uses a lens as its objective to form an image. The refracting telescope design was originally used in spy glasses and astronomical telescopes but is also used for long focus camera lenses.

A reflecting telescope (also called are flector) is an optical telescope which uses a single or combination of curved mirrors that reflect light and form an image.