- They are cosmopolitan in distribution.

- Their vegetative body is tubular filamentous and branched known as hyphae. The mass of hyphae is known as mycelium but some species are unicellular, e.g. Mucor, yeast.

- Their cell wall is made up of chitin fungal cellulose.

- Due to the lack of chlorophyll they can’t prepared their own food. So, they show heterotrophic mode of nutrition.

1. Vegetative: It reproduce by fragmentation, budding and fission.

a) Plasmogamy: Fusion of protoplasm.

b) Karyogame: fusion of nucleus to form diploip cell or Zygote.

Classification of fungi: Based on reproduction structure and life cycle patterns fungi are,

- They have comparatively simple thallus, may be unicellular or filamentous. Filamentous body of fungi is known as hypha. Hypha is aseptate and coenocytic.

- They may be aquatic or terrestrial, parasitic or saprophytic.

They are classified into two further types.

- They are mostly aquatic and parasitic. Only few are saprophytic.

- The name oomycetes due to the formation of diploid zygote known as oospore, e.g. Phytopthora.

- They are mostly terrestrial and saprophytic and only some are parasitic.

- The name Zygomycetes due to the formation of diploid Zygote called zygospore, e.g. Mucor.

- They are mostly terrestrial, saprophytic and parasitic.

- Hypha is septate and branched but some species are unicellular.

- A sac like structure called ascus is form after fusion of male and female gametes, e.g. Yeast

- They are mostly terrestrial, saprophytic, parasitic and symbiotic.

- They are mostly terrestrial and parasitic. Only few are saprophytes.

- Hypha is septate and branched.

- Sexual reproduction is absent so they are known as fungi imperfect, e.g. Alternaria.

About 150 species of Mucor have been reported. They are mostly saprophytic fungi which mostly grow on stable bread, jam, pickels, leather, clothes, animal dung ect. They look like colony mass over the surface of substratum. Their vegetative body is known as hyphae which is a septate and coenocytic. Hyphae is of two types.

a) Prostrate hyphae: These hyphae spread over the surface of substratum which help in absorption and fixation.

b) Aerial hyphae: These hyphae arise from prostrate hyphae. This bears sporangia at its tip. They are erect and known as sporangiophore. 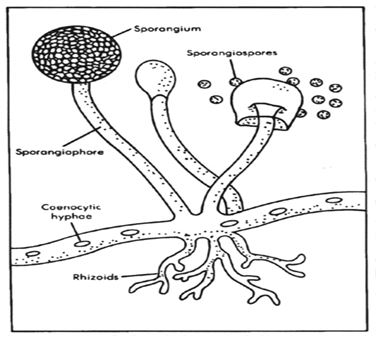 Hyphae is eukaryotic aseptate and coenocytic. Its cell wall is made up of chitin. The protoplast consists of many nuclei, vacuole, reserve food and other cytoplasmic organelles except plastid.

In this type the aseptate hyphae of Mucor undergoes septation in liquid media. Each segment separated from the parent hyphae develop into spore called oidia. Each oidium either germinates into mycelium or undergoes budding to produce many oidia.

At the time of reproduction prostrate hyphae give rise to aerial hyphae. The tips of the aerial hyphae swell to form sporangia. The protoplast from adjacent hyphae accumulates at sporangia and latter differentiated into two regions. Peripheral fertilization region with many nucleus and central sterile region with few nucleuses. The central sterial region develops in to colomella which help in dispersal of spore. The peripheral fertile region under goes cleavage to form multinucleated mass of protoplasm. Each mass round off and secrete thin wall around it and become spore called sporangio spore. At maturity, sporangial wall breaks and spores are liberated out. Spore fall on suitable substratum germinate into new mycelium. 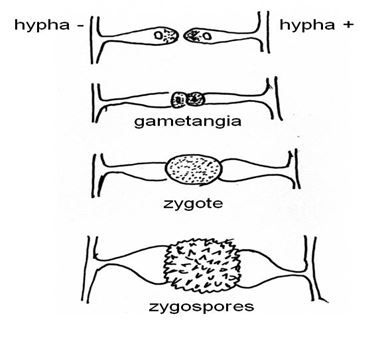 In homothallic species conjugation takes place between two hyphae of same mycelium. At the time of reproduction two hyphae of different strain come in contact with each other by their small out growths. This out growth swells to form club-shape progametangia by accumulating protoplast from adjacent hyphae. The distal ends of progametangia divide transversely terminal gametangia and basal suspension. The gametangia behave as coenogametes. This gamete fused to form zygote called zoospore. Zoospore is dark, thick walled. After long resting period zygospore germinate to produce germ tube for promycellium. Germ tube grows and develops germsporangia at its tip. The germsporangia undergoes meiosis followed by mitosis to form large number of haploid germ spore. These germspore falls from suitable substratum germinate into new mycelium.

They are mostly saprophytic fungus which mostly grows on sugar rich solution such as sugar solution, fruit juice, nectar etc. They are unicellular eukaryotic and non-mycelia fungi.

Cell is oval or spherical in shape. Its cell wall is made up of chitin. The protoplast consists of large centrally located vacuole, nucleus, cytoplasmic organells and reserve food such as oils. 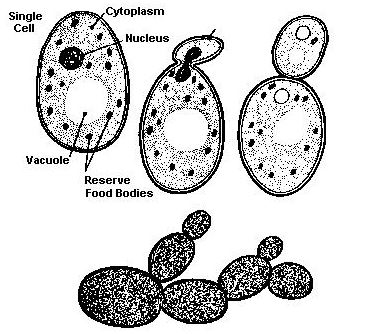 It is common method of reproduction in yeast. It takes place under favorable condition. During reproduction yeast self-produce one or more tiny outgrowth or protuberances. These out growth in large in size and formed bud. At the same time the nucleus and cytoplasmic organelles divide. One of the nucleus with other cytoplasmic contain migrate towards the bud. A constriction is developed at the base of bud. They are separate bud from mother yeast. Sometimes the daughter yeast or bud produce another while it is still attached to mother yeast and form chain like structure known as pseudomycellium.

ii) Fission: this type of reproduction takes place in some yeast cells, commonly called fission yeasts. In this type the nucleus of the mother yeast divide amitotically into two and move at each pole. A transverse wall or septa developed at the middle of cell, that separate mother yeast into two daughter yeast.

It takes place by conjugation. It takes place under unfavorable condition (scarcity of food material). The somatic cell directly actsas gametangia. Three types of life cycle are observed in yeast.

1. Haplobiontic life cycle: In this type haploid phase is long and diploid phase is short. The vegetative cell functions as gametangia. During reproduction two haploid gametangia of opposite strain come in contact with each other by their small out growth.  The wall between these small outgrowths dissolved and form fertilization tube. The nuclus of each cell fused to form diploid cell or zygote. The diploid cell now functions as a sac like structure called ascus. The diploid nucleus in a ascus undergoes meosis followed by mitosis to form 8 haploid ascospores. These ascospores liberate out of the ascus and live independent life as a new yeast cell. 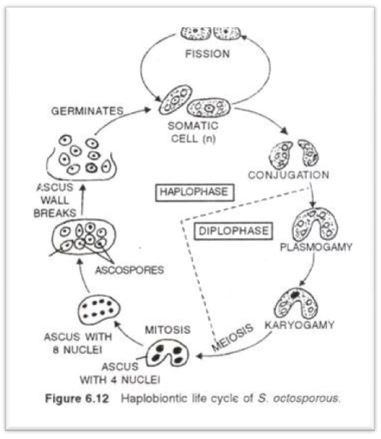 This type of ife cycle is observed in saccharomycod ludwiqii. The species is diploid in nature. The diploid cell function as a sac like structure called ascus. The diploid nucleus in an ascus undergoes meiosis to form haploid ascospore. These ascospore conjugate in pair to form two diploid zygote within ascus. These zygote produce germ tube, liberate out of the ascus and under goes septation to form sprout mycelium. The sprout mycelium under goes budding to produce much diploid bud or cell. 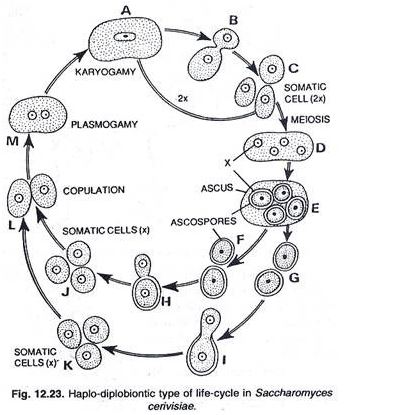 Fungi are both useful and harmful to man kinds.

(A)As food: Some species of mushroom are used as a food. Some of the edible mushrooms are Aqaricus campestris, Aqaricus bisporous etc.

a) They are used in the production of bakery item, e.g. Saccharomyces cereuisiae.

b) They are used in the production of alcoholic beverage such as wine, beer etc, e.g. Saccharomyes pireformis.

c) They are also used in the manufacture of enzymes and organic acid.

d) They are used in diary industries to provide flavor to the cheese.

(C) Role in Medicines: They are employed for production of different kind of medicines, e.g. penicillin, ephedrine.

(D) Bio-Fertilizer: Fungi are also used as bio-fertilizer as they decompose complex organic matter into simpler form and release to soil.

Some species have symbiotic relationship with root of higher plant. This association is known as mycorrhiza. The applications of mycorrhizal fungi in root of other crops help to increase productivety, e.g. Polyporous.

b)Fungi can cause number of disease in plant and in animal, e.g. Alternaria solani(blight of potato), Trichophyton (ringworm of skin)

d) Some species of mushroom are poisonous to human beings, e.g. boletus satanas.