b) They have prokaryotic cell, i.e. lack of true nucleus and membrane bound organelles.

c)  They have circular DNA.

d) They have rigid cell wall.

e) Most of the species are heterotrophic and some are autotrophic.

g) They are known as decomposer of the environment, and help to increase the fertility of the soil.

There are two types -

Bacteria: Bacteria were first discovered by Anton Van Leeuwenhoek in 1675. The present name bacterium was given by Ehrenberg in 1828. Later Louis Pasteur in 1864 and Koch in 1876 reported the disease causing ability of these organism. Robert Koch was the father of bacteriology.

Distribution: Bacteria is widely distributed in nature and found almost everywhere. They occur in fresh water, pools, pound, river, in air, soil, foodstuff, fruits. Bacteria can grow in almost all habitat, they can grow and remain alive in freezing temperature to hot water. They can remain alive in soil up to the depth of half a meter.

Size:  All bacteria are microscopic in size. The average size of common bacteria ranges from 0.5µ to 1.5µ in diameter. The rod-shaped bacteria measures about 0.2µ to 2µ in width and 2µ to 10µ in length.

Shape: bacteria exhibit different shape. According to their shape, they are divided into following types.

A)  Coccus Bacteria: they are spherical or rounded in shape. This bacteria lack flagella. According to their arrangement they are further classified into following type.

b) Diplococcus: They exist in pair, e.g. pneumonia

f) Sarcina: They are arranging in a club like manner.

B) Bacillus Bacteria: They are rod like or elongated in shape. According to their arrangement they are of following types.

d) Pollisade: They are arranged in stack like manner, e.g. coryne bacterium

C) Helical bacteria: They are coiled or twisted bacteria.

b) Vibrio: They are curved or comma like in shape, e.g. Vibrio cholera. 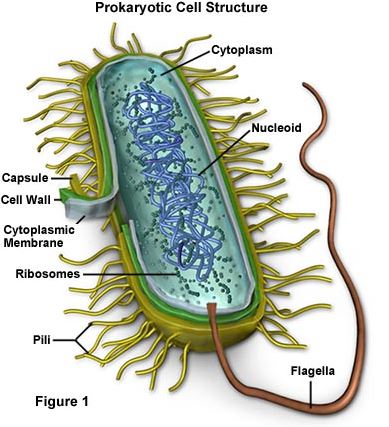 The cell envelope is composed of the plasma membrane and cell wall. As in other organisms, the bacterial cell wall provides structural integrity to the cell. Inprokaryotes the primary function of the cell wall is to protect the cell from internal turgor pressure caused by the much higher concentrations of proteins and other molecules inside the cell compared to its external environment. The bacterial cell wall differs from that of all other organisms by the presence ofpeptidoglycans which is located immediately outside of the cytoplasmic membrane.peptidoglycans is responsible for the rigidity of the bacterial cell wall and for the determination of cell shape. Since the cell wall is required for bacterial survival, but is absent in eukaryotes, severalantibiotics notably the (penicillin and cephalosporin) stop bacterial infections by interfering with cell wall synthesis, while having no effects on human cells which have no cell wall only a cell membrane. There are two main types of bacterial cell walls, those of Gram-positive bacteria and those of Gram-negative bacteria.

Pilli:  It is protoplasmic out growth made up of protein called pillin. It helps in the attachment of another bacterium during reproduction. They are mostly present in male bacteria.

Nutrition in bacteria:  Bacteria are both autotrophic and heterotrophic, organism.

(A)Autotrophic bacteria: These bacteria can synthesize their own food, .i.e. they contain chlorophyll. They are divided into following types,

(a)Photosynthetic or photo autotrophic bacteria: these bacteria can synthesize their own food with the help of light energy, photosynthetic pigment, carbondioxide, compound of sulphur and organic compounds. They do not use water and no oxygen in evolved. They are generally anaerobic. They are divided into following types.

-Green sulphur bacteria: they contain chlorobium, chlorophyll as a photosynthetic pigment. They use sulphide or sulphate for the production of food, .e.g. pelodictyon, chlorobium.

-Purple sulphur bacteria: they contain bacretio chlorophyll and carotenoid. They use sulphide or thiosulphate, e.g. choromatium

-Non sulphur bacteria: they contain bacteriochlorophyll as a photosynthetic pigment. They use organic compound for the production of food, e.g. Rhodospirillum.

(b)Chemosynthetic bacteria: they do not contain any photosynthetic pigments and no light energy is used. They obtain energy by oxidation of inorganic substance such as ammonia nitrite, hydrogen, sulphur, iron etc. they are generally aerobic. They can be divided into following types.

-Sulphur bacteria: They obtain energy by oxidation of hydrogen sulphide. This energy is utilized in the production of food.

-Hydrogen bacteria: They obtained energy by oxidation of hydrogen.

-Nitrifying Bacteria: This bacteria obtain energy by oxidation of ammonia into nitrite and then into nitrate.

These bacteria cannot synthesize their own food and obtained from other sources. They are divided into following types.

(b)Symbiotic bacteria: these bacteria live mutually with other living organism so that both get benifited, e.g. rhizobium frankia.

Respiration is the oxidation of food material with release of energy. Based on respiration they can be classified as,

1. Aerobic Bacteria: these bacteria required oxygen or can survive only in the presence of the oxygen, e.g. microbacterium.

2. Anaerobic bacteria: These bacteria can survive in the absence of oxygen, e.g. photosynthetic bacteria.

3. Facultative bacteria: These bacteria can survive in both aerobic and anaerobic condition, e.g. E. coli

1. Role in agriculture: it increases soil fertility by fixing atmospheric nitrogen into nitrogenous compound and provides it directly to the plant or release it to the soil, e.g. Rhizobium, azotobacter, nitrobacter.

2. Role in Industries: In dairy industries some species of bacteria are widely employed for the production of dairy products such as curd, cheese, butter, e.g. lactobacillus acidus.

3. They are also use in production of organic acid, alcohol, vitamins, e.g.  Lactobacillus (lactic acid), clostridium (alcohol and vit. B), E.coli (Vitamins A and 4) they are the major decomposer of the ecosystem, e.g. saprophytic bacteria.

5. They are also used in extraction of metals from the ores, e.g. saprophytic bacteria. This method is known as bio-mining.

10. Some bacteria also use in production of enzymes and vaccines, e.g. bacillus subtilis, BCG , Tetanus toxoid.

1. They are cosmopolitan in distribution.

2. They have prokaryotic cell.

3. Their cell wall is made up of murein with some cellulose, hemicellulose and Pectin.

5. Some member of cyanobactrria consist of special types of cell known as heterocyst.

8. They reproduce by both sexual and vegetative method, only nostoc, oscillatoria, anabaena etc.

Nostoc is colomical species. Each colony is surrounded by  mucilaginous sheath and consists of large number of filamentous body, known as trichome. Trichome look like chain of bead trichome with individual sheath is filament. Each trichome consist of normal vegetative cell, heterocyst and akinet 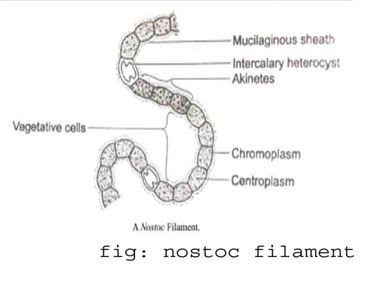 Cell is spherical or oval in shape. Its cell wall is made up of peptioglycon or murin. The protoplast is differentiated into peripheral chromoplasm and central colorless centroplasm. The chromoplasm consist of photosynthetic pigment, Gas vacuole, reserve food material etc. the centroplasm consist of circular DNA. The cell bound organelles are absent.

Reproduction takes place by vegetative only.

1. Fragmentation: In this method trichome break into several pieces due to mechanical or physiological injury. Each piece developed into new type of trichome.

2. Hormogonia: It is the piece of trichome with heterocyst. Each hormogonia later develop into new trichome or form new colony.

4.By akinete: The protoplast of the heterocyst liberate out and develop into new trichome.

1. It is used to proteinous food, e.g. spirulina

2. They are also used as a biofertilizer, e.g. Nostoc, Anabaena.

3. Some species of cyanobacteria is use to control the growth of mosquito larva in pound, e.g. Aulosira.

5. Some species are poisonous to animal, e.g. Microcystis.

They are also known as living fossils. Their cell wall is made up of polysaccharide and protein. They lack peptide glycan. Their cell membrane is made up of complex lipid due to this they can resist adverse environment condition. They are three types, Methanogens, Halophiles, and Thermoacidophiles.