Lichen is an association of algae and fungi. The algal partner is called phycobiont, the phycobiont are cyanobacteria and sometimes chlorophyceae. Whereas the fungal partner is called mycobiont, the mycobiont are mainly ascoycetes, sometimes basidiomycetes and rarely a deuteromycetes. Fungal partner is mainly concerned the protection againt dessication, excessive light intensity, and temperature. While the algal component, due to the presence of chlorophyll it manufacture the food for both. This type of association is called symbiotic relationship.

It is thin, flat and hard layer of thallus without distinct lobes the whole lower surface of filament is attach to the substratum, thallus bears apothesia (fruiting body). For eg Lecanora, Graphis, Strigula.

2. FOLIOSE LICHEN:
The thallus is many lobed and leaf like. The rhizinae the organ for attach the substratum also helps in absorption. The surface present several fruiting bodies called apothesia, it is fungal component. For eg Physcia, Parmelia, Peltigera.

Complex type of thallus, showing much branching. The fruiting body is also apothesia. The thaallus may be erect or pedant (hanging from tree). Only flattened disc remain attach to the substratum. Eg. Usnea, Cladonia. 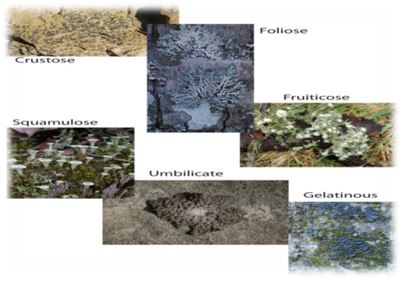 In general plants are more sensitive than human. So the lichen cannot grow in the environment where the maximum concentration of so2. When the accumulation reach a toxic level the lichen dies due to accumulation of unwanted food material.

Over a period of time one type of plant community replace by another type referred the succession. Lichen referred as pioneer of ecological succession on rocks and barren land.

Lecanora, parmelia, Umblillicaria are used as food in many part of world. Reindeer moss, Iceland moss is important source of fodder.

Different species of lichen are used in the different types of disease for e.g. Par melia perlata is used in treatment of snake bites. Usnea and cladonia are used in antibiotic preparation.

6. In cosmetic and perfumery: