1. All the organisms are unicellular and microscopic in nature.

2. They aremostly aquatic and some are found in damp soil.

3. They may be free-living as well as may be parasitic.

4. Reproduce by means of sexual and asexual method.

5. Their locomotory organs are cilia, flagella and pseudopodia. 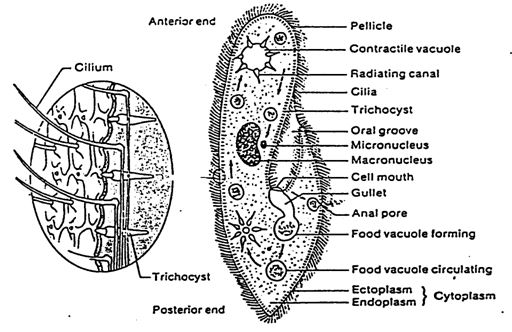 Paramecium is a fresh water protozoan, commonly found in the pond, lake, reservoir, etc. Usually they live in the water having dead or decaying materials. So paramecium is also called infusorians animal.

Usually Parameciumlives in colony but sometime swims actively in solitary. It shows both types of nutrition,holophytic and holozoic.

Paramecium is a microscopic unicellular animal, shaped almost looks like sole of foot or slipper. So it is commonly called slipper animalcule.

The body shaped is fixed due to presence of pellicle layer and the size varies between 0.3mm to 0.4mm. Anterior portion is blunt, posted portion is almost pointed, dorsal or aboral portion have hexagonal facets and an oral groove is present in the ventral portion. Whole body is covered by numerous fine cilia, cilia of the posterior region are long combined to form caudal tuff which help in changing body direction at the time of swimming.

The protoplasm is divisible into outer ectoplasm and inner endoplasm. The ectoplasm is non- concentrated whereas endoplasm is concentrated. There are radiating contractile vacuoles, each in the anterior and posterior regions of the body. Each contractile vacuole has regenerating canals for the collection of excess water and nitrogen waste of protoplasm. Therefore conduct accessory excretory organ or osmoregulatory organ. There are two nuclei almost at the centre of the cell, one nucleus is large bean shaped called macronucleus or meganucleus. One smaller nucleus is micronucleus, content idiochromatin or hereditary chromatin, control all the reproductive activities.

Paramecium, although unicellular animal can reproduces by asexual and sexual method.

a) Asexual reproduction: It takes place by binary fission method. First of all, micronucleus divides into 2 nuclei by mitosis then followed by Macronucleus and it also divided into 2 parts by mitosis. And then the cytpharynx and the cytoplasm divides into 2 equal half. Then transverse constriction is arises. Then, new contractile vacuoles are formed. The constriction meet at center and two daughter paramecia re produced.

b) Sexual Reproduction: Under certain conditions, such as overcrowding or environmental stress, Paramecium turns from asexual reproduction to sexual reproduction. Sexual reproduction involves the exchange of genetic material between two individuals of different 'mating strains'. Sexual reproduction takes place by conjugation method. In this method two paramecia line up side by side and then fuse together. The Paramecia which take part in conjugation process are called conjugant’s. During the process, micronucleus divides into four– one of which will be exchanged during conjugation. This process involves meiosis, where the diploid micronucleus divides twice to yield four haploid micronuclei. Three of these disintegrate one remains functional. The functional micronucleus in each ex-conjugant divides into two and the conjugant divide by   binary fission into two daughter paramecia from each ex-conjugant. The macronuclei are shared equally. Later, the micronuclei of two daughter paramecia divide into two and macronuclei are again shared, which result into the production 8 paramecia. It represents a combination of genetic material derived from two genetically different individuals. The mates then separate and live their life. 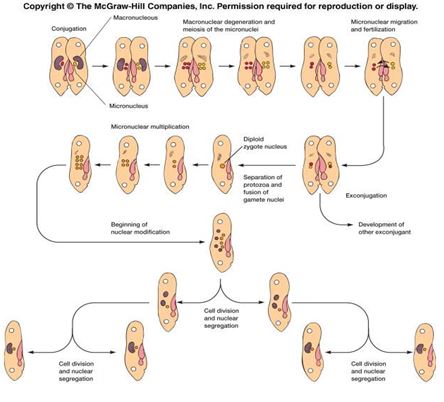 There are some other methods of sexual reproduction

It takes place in single paramecia. During this process the micronucleus divides into two and they fused together to form zygote. And later that zygote divides to produce new daughter paramecia.

It takes place in two individuals. In this process micronucleus divides 3 times to produce 8 nuclei. In which 6 degenerate and remaining 2 fuse together to give zygote.

The word “malaria” is a Greek word (mala + aerial) which means (Bad + air) i.e. malaria really means bad air. The ancient Greek people did not know about the causes of the symptoms like high fever, headache, chill fever and body sweating. Usually appeared during evening period.

Plasmodium is a blood pathogenic parasite which disturbs human liver and RBCs causes the disease called malaria. The major symptoms of malaria in man;

3. Chill or shivering fever and

This symptom is mostly seen during evening period because in that period, they become very active in damaging RBCs.

Plasmodium mostly lives in colony in the liver sinusoids and in the blood. Plasmodium is widely distributed in tropical and subtropical unhygienic places. It completes its life cycle in two different host’s male and female mosquito.

In the structure of sporozoite, the sporozoite stage is the most infective stage because only this stage enters into human blood circulation. Usually, they live in colonial form in the liversinusoids. The body is fixed due to pellicle layer, looks clubshape, anterior almost pointed possess apical cap but posterior is blunt. There is one pair of organelle secrete toxin. Presence of single nucleus, few tubules and a few mitochondria. The average size has about 14-15u in length a 1u in breadth.

1. Life cycle of plasmodium in man 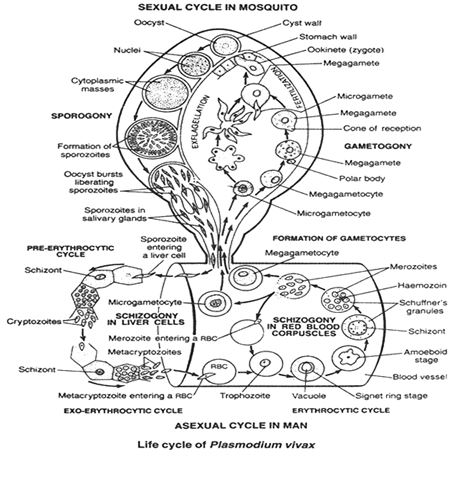 Although in man plasmodium reproduces by asexual method even then considered as primary host because of disease exposer.

In man life cycle completes by three steps or cycles such as:

a.Pre-erythrocyctic cycle: After the bite of female anopheles mosquito, thousands of sporozoites enter through blood circulation and finally reach into the liver sinusoids. Afetr few days, each sporozoites start to invade into liver cell. After the entrance of sporozoite size changes into oval or spherical and slowly feed upon the protoplasm of liver cell. As a result size enlarges, nucleus divide by multiple fission, later convert into schizonts or merozoites. At last liver cell rupture release cryptozoites.

Hence in pre and exo erythrocytic cycle reproduces schizonts or merozoites within the liver. Therefore cycle is also called liver schizogony cycle. To complete this cycle, it needs 12 days.

After the production of schizonts mainly metacryptozoites comes in the blood circulation and invade into RBCs. After the invasion metacryptozoites inside the RBCs swims actively by amoeboid movement. After few hours, a non-contractile vacuole appears which shifted nucleus to periphery which gave the shape of ring called signet ring stage.

Size of the metacryptozoites gradually enlarges by ingesting protein of haemoglobin. The feeding stage is called trophozoites stage. Nucleus of the metacryptozoites divide by multiple fission, about 12-24 in numbers, all remain at the periphery after the disappear of the non-contractile vacuole. At the center depositshaematin particles which are called schuffner’s dots. These haematin particles later convert into haemogin toxin. Nuclei with schuffner’s dots collectively called Rossette stage. At last RBCs wall rapture releases schizonts in the blood called micromerozoites. To complete this cycle need at least 10-12 days. Therefore after the bite of female mosquito usually malaria fever appears after 21-22 days. Micromerozoites again and again invade fresh RBCs which takes nearly 24-48 hours to destroy RBCs. This is called incubation period, Hence in the patient every 48 hours fever increases.

Micromerozoites through blood circulation again reach into liver sinusoids which repeat all the processes again; this repeating cycle is called post erythrocyctic cycle.

In Female Anopheles Mosquito, Plasmodium reproduces by sexual method even then considered as secondary or carrier or intermediate host because of disease carrier. Life cycle complete by gametogony with sporogony cycles. 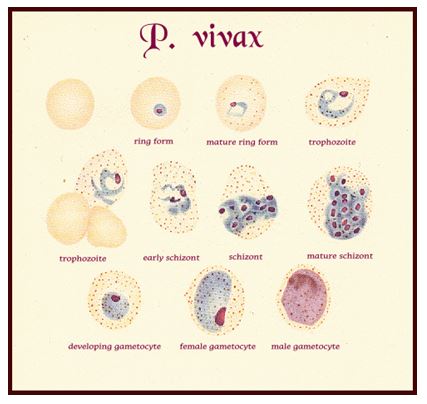 When the Female Anopheles Mosquito bite and sucks the blood of  malarial patient, gametocyte including cryptozoits, metacryptozoites and microcryptozoites reach into the crop in which except gametophyte all other stages are digested.

Gradually amount of cytoplasm decreases. At last freed all the sperm nuclei. Female gametocyte is also follow meiosis cell division which give only one ovum. Among the sperm nuclei, only one active sperm nucleus migrates towards ovum to get fertilized. As a result form zygote.

Each zygote after few hours change its shape into sickle or club, such changed structure is called ookinete stage. The pointer of the ookinete penetrates the wall of the crop remains outside the crop wall in oval or spherical shape called oocyte. This oocyte gradually enlarges its nucleus divide and reproduces thousands of sporozoites. The formation of sporozoite from the development of oocyte is called sporogony cycle.

All the sporozoite swims actively in the colorless haemocoelomic fluid from then onward penetrate the wall of the salivary glands in which they rest.

Two salivary glands have common salivary duct which opens directly into the proboscis. Hence at the time of bite releases sporozoite in the healthy person.

Symptoms are very similar as shown by Plasmodium vivax. The difference is the irregularity in the fever, fever is fatal can affect directly to the brain.

3. P.ovale: It is commomly called mild tertian malaria mainly seen in the domestic animals like pigeon.

4. P.malarie: It is commonly called quartan malaria still only confined in the African countries.

a. by using mosquito nets.

b. by removing watery areas either by any waste oil or completely removed

a. By using anti-mosquito coils,mats or by fumigation.

b. By using lotion or spray or ointment.

a. By pouring larvivorous fishes in the pond or lake which feed upon the larvae of mosquitoes. Therefore indirectly malaria controls.