The fraction of the total number of molecules present as free ions in the solution is known as degree of ionization of electrolyte (α):

The thus formed ions try to recombine to form unionized molecules, forming a dynamic equilibrium, described by a constant known as ionization constant.

Arrhenius concept of acids and bases:

According to the Arrhenius concept, hydrogen chloride, acetic acid, and sulphuric acid, are

acids because all these compounds give free H+ ions in aqueous solutions.

Compounds such as NaOH and NH4OH are bases, because these compounds give free OH- ions in aqueous solutions.

Thus, According to Arrhenius concept of acids and bases, the neutralization of an acid with a base involves the reaction between H+(aq) and OH-(aq) i.e.,

From acid from base

This concept defines acids and bases as compounds-containing hydrogen and hydroxyl group respectively. There are however, many compounds, which act as acid even when there is no hydrogen in their molecule. Similarly, there are many bases, which do not contain hydroxyl group.

BronstedLowry concept of acids and bases:

According to the Bronsted-Lowry concept, an acid is a proton-donor, and a base is a proton-acceptor.

The reaction of an acid with a base involves transfer of a proton from the acid to the base. So, an acid and a base should be present simultaneously in any system. The extent of an acid-base reaction is governed not only by the proton-donating ability of the acid, but also by the proton-accepting tendency of the base. Acids and bases classified on the basis of this concept are termed as Bronsted acids and bases.

Although the Bronsted-Lowry concept of acids and bases is better than the Arrhenius concept, it cannot account for the acidic and basic character of compound not containing hydrogen. For example, acidic nature of oxides such as CO2, SO2 etc., and the basic nature of the compounds of the type CaO, Na2O etc

Lewis concept of acid and bases:

Lewis proposed broader and more general definitions of acids and bases which do not require presence of protons to explain the acid base behavior. According to Lewis concept ,An acid is a substance which can accept a pair of electrons.

A base is a substance which can donate a pair of electron.

Acid-base reactions according to this concept involve donation of electron pair by a base to an acid to form a co-ordinate bond..

Lewis acids are the species having vacant orbitals in the valence shell of one of its atoms. The following species can act as Lewis acids.

a) Molecules having an atom with incomplete octet e.g., BF3, AlCl3 etc.

Pure water being a weak electrolyte under goes self ionization to a small extent as follows:

The equilibrium constant for this reaction is:

The concentration of unionized water is taken as constant because the degree on ionization of water is very small. So we can write this equation as:

Effect of temperature on K:

The process of dissolving salt in water to make its aqueous solution which may be acidic, basic or neutral is called hydrolysis of salt.

It is divided into four categories they are:

a.Salts of strong acid and strong base do not go hydrolysis. E.g: NaCl, NaNO3, etc.

Here, let us consider NaCl as an example. It is strong electrolyte, when dissolved in water; it goes complete dissociation to give Na+ and Cl- ions. But these ions do not have tendency to react with H+ or OH-. So, there is no change in concentration of H+ or OH- ions and hence the solution remains neutral.

b.Salts of weak acid and strong base:

Sodium acetate, CH3COONa, NaCN, KCN are examples of this type of salts. Here let us consider sodium cyanide (NaCN) it is the salt of weak acid, HCN and NaOH. It ionizes to form CN- anions. Being conjugate base of a weak acid. CN- is relatively strong base. Thus, the anion CN- accepts a H+ ion from water and undergoes hydrolysis.So, the solution becomes basic due to the generation of OH- ions.

Ammonium chloride is a typical e.g. of this salts. It is the salt of a weak base NH4OH and strong acid HCl. It ionizes in aqueous solution to form the cation NH4+.

Here, NH4OH+ is a relatively strong acid. It accepts OH- ion from water (H2O) and forms the unionized NH4OH and H+ ion.

So, the accumulation of H+ ions in solution makes it acidic.

The e.g. of this type of salts are ammonium acetate, ammonium cyanide etc. The resulting solution is neutral, basic or acidic depending on the relative hydrolysis of the anions and the cations.

Solubility product principle and its application: 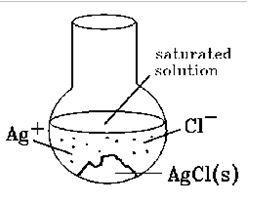 Consider a sparingly soluble substance AB which ionized as A+B-

Where, Ksp = solubility product. The solubility is the product of concentration of ions of sparingly soluble salts in its saturated solution to a particular temperature. It is represented as Ksp.

To precipitate in a chemical reaction, the ionic product must exceed the solubility product of sparingly soluble salt at particular temperature.

The common ion effect is generally employed in qualitative analysis.

The cations of group III are precipitated as their hydroxides by NH4OH in the presence of NH4Cl.

The cations of group V are precipitated as their carbonates by the addition (NH4)2CO3, in the presence of HCl.

Common ion effect and its application:

When a soluble salt, say, A+C- is added to a solution of another salt (A+B-) containing a common ion (A+), the dissociation of AB is suppressed

Thus, the common ion effect is the "suppression of the dissociation of a weak acid or a weak base on the addition of its own ions.

Precipitation of sulphides of group II and IIIB basic radicals

A solution which resists any change of pH when a small amount of a strong acid or a strong base is added to it, is called a buffer solution or simply as a buffer.

Alternatively, a buffer solution may be defined as a solution whose pH value does not change appreciably upon the addition of small amounts of a strong acid, base and/or water from outside.