Population can be defined as the total number of individuals occupying at a particular area at a particular time. The organisms are capable of interbreeding among themselves. The size and the density of a population depends on different factors;

Like other countries the population of Nepal is also increasing day by day.

The mathematical models of population growth are basically two types;

The J-shaped growth pattern of population is shown in the given figures. This type of population growth is seen in algae, some insects, annual plants and lemmings of tundra. Finally this growth curve shows rapid increases in mortality rate. It consists of two phases namely lag phase and exponential phase. 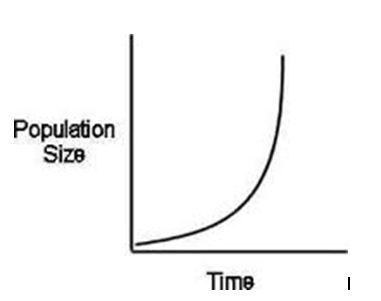 This type growth is observed in yeast cell and most of the organisms including human. Finally this growth curve shows slow zero growth rate as birth rate equals to death rate. It consists of three phases namely lag phase, exponential phase and stationary phase. 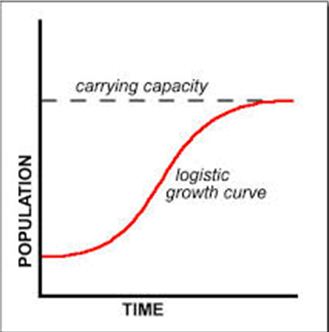 Reason or causes of Increase in Human population

1.Advancement in agricultural technology: due to Advancement of science and technology production of food has been enhanced.

4.Lack of education because the ratio of increase is more in rural area.

5.Misbelieves like in male dominant society, people prefer to have more sons then daughter.

6.In some reason polygamy is very common.

7.Early the marriage sooner the child.

Problems or Consequences of over population:

a.Space: New towns and cities are coming up to accommodate the growing population. This put a great strain on agricultural lands and forest areas.

b.Food supply: It will lead to the food crises resulting in famines, hunger and poor health.

c.Unemployment: Rise in population has resulted in large scale unemployment.

e.Poverty: Birth of every child adds the poverty.

a.Energy crises: Increases in the population has created greater demand for energy.

c.Deforetation: Forest trees are cut and forest areas are encroached.

Control of over population

The people are suggested following ways of controlling over population;

1.Education about  population must be focused in the curriculum of al grades.

3.Abortion is usually applied to the deliberate destruction of a foetus by drug, Which help to control over population.