Static electricity is often created when two objects that are not good electrical conductors are rubbed together, and electrons from one of the objects rub off onto the other. This happens, for example, when combing one's hair or taking off a sweater.

The generation of electrostatic charges, or static electricity, through friction For example, if a di electric such as glass or amber is rubbed with a dissimilar dielectric such as silk or wool, and each is separated, such charges are produced.

Electrostatic induction is a redistribution of electrical charge in an object, caused by the influence of nearby charges.

In a conductor, electric current can flow freely, in an insulator it cannot. Metals such as copper typify conductors, while most non-metallic solids are said to be good insulators, having extremely high resistance to the flow of charge through them.

An electron is a negatively charged subatomic particle. It can be either free (not attached to any atom), or bound to the nucleus of an atom. Electrons in atoms exist in spherical shells of various radii, representing energy levels.

Bound electrons are an electron whose wave function is negligible except in the vicinity of an atom.

If a rubber comb is run through dry hair, the hairs stand up and spread out;

If a rubber comb is run through dry hair, the hairs stand up and spread out because Static electricity is often created and electrons from one of the objects rub off onto the other.

When a polythene piece is rubbed with wool, it acquires a negative charge;

The electric wind describe the airflow induced by electrostatic forces linked to corona discharge arising at the tips of some sharp conductors (such as points or blades) subjected to high voltage relative to ground.

Electrification by friction on the basis of modern theory;

The process of developing charge in a body is called electrification. According to this theory, a body can be charged by the transfer of electrons.

According to this theory, matter is composed of a large number of small particles called atoms. From the study of atomic structure, we know that an atom consists of a central parts called nucleus. The electron revolves round the nucleus in different fixed orbits. The electron contains proton and neutrons. A proton is positive charge particles whereas neutron is changeless particles.By any process if some of the electrons are removed, the body becomes positively charged because of more number of protons than electrons. On the other hand, the material that receives electrons acquires negative charge because of extra electrons added.

Charging a body negatively by induction:

Electrostatic induction is a redistribution of electrical charge in an object, caused by the influence of nearby charges.

If a negatively charged body is brought in contact, then electrons flow from it to the body to be electrified. In contrast to conduction, there is no transfer of electrons between the two bodies during charging by induction. 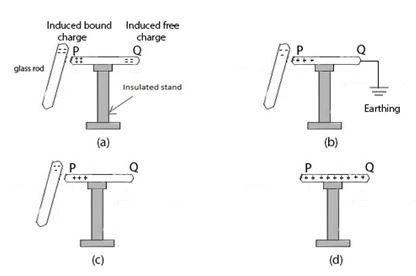 The various steps involved in charging a gold leaf electroscope positively by induction;

The gold-leaf electroscope was developed in 1787 by British clergyman and physicist Abraham Ben net as a more sensitive instrument than pith ball or straw blade electroscopes then in use. It consists of a vertical metal rod, usually brass, from the end of which hang two parallel strips of thin flexible gold leaf. 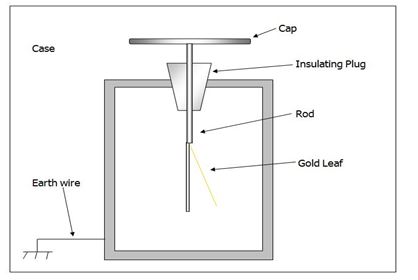 It consists of a vertical metal rod, usually brass, from the end of which hang two parallel strips of thin flexible gold leaf. A disk or ball terminal is attached to the top of the rod, where the charge to be tested is applied.

To protect the gold leaves from drafts of air they are enclosed in a glass bottle, usually open at the bottom and mounted over a conductive base. Often there are grounded metal plates or foil strips in the bottle flanking the gold leaves on either side. These are a safety measure; if an excessive charge is applied to the delicate gold leaves, they will touch the grounding plates and discharge before tearing. They also capture charge leaking through the air that could accumulate on the glass walls, and increase the sensitivity of the instrument. In precision instruments the inside of the bottle was occasionally evacuated, to prevent the charge on the terminal from leaking off through ionization of the air.

1. Take a metallic vessel and place it on the disc of GLE. Since the vessel is electrically neutral, the gold leaves do not diverge.

2. A positively charged metallic sphere is taken and suspended by a silk thread.

3. The sphere is lowered gradually into the ice pail without touching it. The divergence of the gold leaves goes on increasing and becomes maximum when the sphere is completely inside the ice pail.

4. Metallic sphere is gradually removed from the ice pail without touching its wall, the divergence of the gold leaves collapses.

-Lower the positively charged metal sphere again lowered in ice pail. The divergence of the gold leaves goes on increasing and becomes maximum when the sphere is completely inside the ice pail.

-Lower the metal sphere at the bottom of the ice Pail without touching the walls. The sphere does not possess any charge. But leaves remained diverted to their maximum positions as in the figure.

Principle and working of a Van de Graff generator: 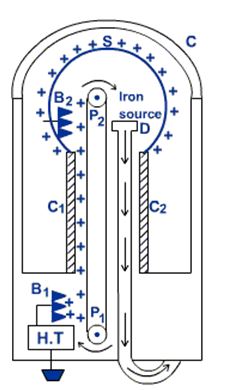 2. If the charged conductor is brought into internal contact with a hollow conductor, all of its charge transfers to the surface of the hollow conductor no matter how high the potential of the latter may be.

The high electric field at the pointed end comb C1 ionizes the air near them. The +ve charges in air are repelled and got deposited on the belt through a corona discharge. The charges are carried upto C2. A similar corona discharge takes place at C2 and the charges are finally transferred to the shell M. The charge spread over uniformly on the outer surface of M raising its potential to few million volts. 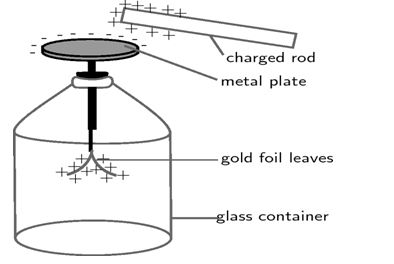 In S.I units the units of surface density of charge is coulomb meter-2 (Cm-2)

The surface charge density depends upon the shape of the conductor. The surface density at all points of a spherical charge conductor is same as shown in figure.

Figure: charge distributions on some surfaces.

The upper portion of a lightening rod always pointed:

As the surface density of a charge around sharp edges or points of a conductor is very great, therefore, the strength of the electric field near the point is very great. The intense electric field breaks down the insulation of air, and sends a stream of charged molecules away from the point. When a negatively charged cloud passes over the building, it induces a positive charge on the pointed ends of lightening rod and an equal negative charge at the metal plate. Due to discharging action of sharp points, a positively charged electric wind is set up that neutralizes the negative charge on the cloud. Negative charge on the metal plate is completely neutralized in the earth. If lightening occurs then the conducting rod sends it directly to the earth and save our building from damaging. Hence, the upper portion of a lightening rod is always pointed.

Electric shocks may be felt on touching a running motor car;

As the car contain metallic tank which gets charged due to friction with air when it is running. As our body behaves as conductor and when touched touch a running car then the charge which was stored on the metallic tank directly flows from our body to the ground results in the getting shock. Hence, electric shocks may be felt on touching a running motor car.

The two important uses of gold leaf electroscope are;

1. To detect the presence of charge on a body.

2. To know the nature on the body.