The process of elimination or removal of harmful substances from the body is known as excretion. The organs associated with the removal of harmful substances known as excretory system. Major excretory system is urinary system because most of the nitrogenous waste products, excess water and other toxic substances are thrown outside as urine. Skin, lungs liver and intestine are known as accessory excretory organs. Nitrogenous waste products are eliminated by urinary system (kidney).Volatile substances (alcohol, water vapour) are eliminated by lungs. Skin removes salts, water and fat derivatives.

Excretory system of human are: 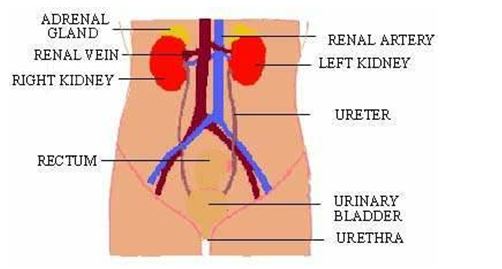 FIG: Urinary system of human being

Each kidney is dark red bean shaped measured about 11cm long and 150gm weight. They either side of vertebral column of lumber region. Right kidney is slightly lower than left. Each kidney is enclosed by renal fascia, adipose capsule and renal capsule. Blood vessels, Lymph vessels, nerves and ureter enter or leave from hilus renalis of kidney.

Histologically, each kidney is composed of about one million nephrons.

It is outer dark part of kidney. It consists of Bowmann’scapsule and nephrons.

Medulla is made up of conical modularly pyramids (15-16).Between the pyramids cortex extends as renal column of bertini. These modularly pyramid are connected with minor calyces then major calyces. The calyces open into renal pelvis. 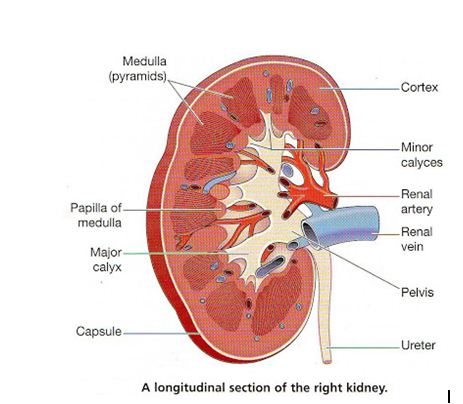 These are one pair. Ureters are thin and muscular tube of about 30 cm long. These arise from hilum of kidney and open in to urinary bladder. Upper portion is renal pelvis and lower is ureter proper.

It is thin muscular elastic bag located in abdominal cavity. Longitudinal fibers and circular fibers make the bag expanding. The collection of urine in bladder and discharging time from urethra is called micturition. Internal sphincter and external sphincter (voluntary) control the micturition.

It is a short canal. Its length is 20 cm long in male and 4cm in female. It is called urinogenital duct in male as it serves for passage of urine and semen.

Structure of a Nephron (Uriniferous tubule):

Nephrons are the structural and functional units of kidney. These are about one million (ten lakh) uriniferous tubules or nephrons in kidney. Nephron differentiated into: 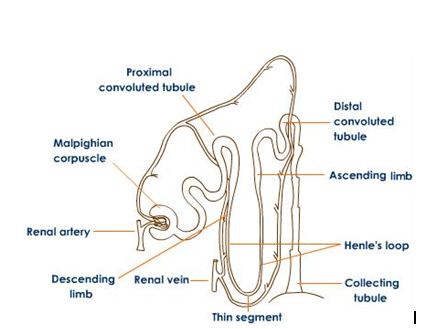 FIG: different parts of a nephrone

2.Renal tubule: It is coiled tubular located behind the Bowman’s capsule. It has following parts:

Internally it is lined with brush bordered cuboidal epithelium. It increases the surface area for absorption. Mitochondria provide the energy for active absorption. It is located in cortex and responsible for reabsorption.

It is middle U-shaped. It lies in the medulla. It has thin descending limb and a thick ascending limb. Both limbs are supplied with parallel capillary system called vasa recta. These supply nutrient and carry reabsorbed water away.

It is posterior part and located in cortex. It maintains the concentration of urine.

The DCT opens in to collecting tubule. It is present in the medulla region. The collecting tubule joins to form large Ducts of Bellini and to Renal pelvis. These ducts drain all the urine towards the pelvis.

Mechanism of Excretion or Urine Formation

It is the first process of urine formation. It takes place in the glomerulus. Richards (1942) explained, the dissolved substances are filtered out in to the Bowmen’s capsule due to the pressure of blood.

The afferent arteriole enters the glomerulus and exist the form of efferent arteriole. The useful and harmful substances are filtered in Bowmen’s capsule. These are glucose, amino acids, vitamins and harmful substances---nitrogenous wastes (like uric acid, ammonia, creatine, large amount of salts) etc. These are the low molecular weight substances. Large molecules like protein, fats, and carbohydrates are not filtered.

About 180 liters of fluid are filtered from plasma but only about 11/2litre of urine is produced every day. 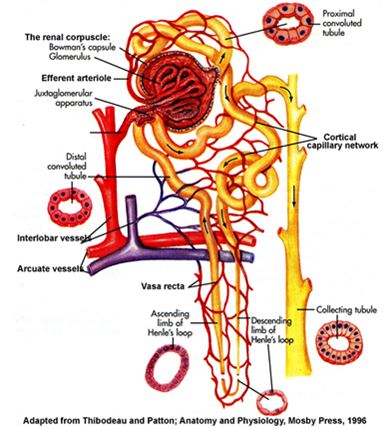 This is the second step in urine formation. It takes place in PCT and Henle Loop. PCT posses many brush bordered microvilli for absorption of filtrate. Mitochondria present it provide the energy for active absorption.

When the filtrate flows through PCT all useful substances are selectively absorbed from the filtrate to the blood capillaries by both passive and active transport mechanisms.

About 50% of urea in the filtrate diffuses back in blood capillaries by diffusion and about 80% of water by osmosis. Then much reduced volume of filtrate passes into Henle’s loop. 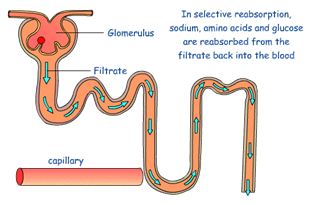 It is the final step in urine formation. It takes place in distal convoluted and collecting. When tubular flows through the distal convoluted tubule(DCT) unwanted substances present in the blood such as uric acid, hippuric acid creatine, ammonia, K+ and H+ are secreted by the blood in to the tubular fluid by the process of active transport. At the same time, Na, Cl, and Ca are moved from the urine into blood to regulate the concentration of ions in plasma. Water also reabsorbed or secreted in the DCT according to the need of water by the body. The regulation of water is controlled by antidiuretic hormone (ADH) released from posterior pituitary gland.

The two limbs of Henle loops are opposite in property and the flow of filtrate is opposite in direction. This process is Counter Current Mechanism. The mechanism concentrates the urine due to the water diffusion. Vasa rectae are the veins present in between the limbs, act as counter current exchangers. The endothelial lining of vasa rectae is freely permeable to ions, urea and water. Role of Henle’s loop and Role of vasa rectae are important for Counter Current Mechanism.

Osmoregulation is the maintenance of constant osmotic condition to regulate the water content and solute concentration in body.

iii.Freshwater fish can take up Sodium ion and Chlorine ion from water directly due to the patience of Ionocytes cells in their gills.

The fishes have hypotonic body fluid. There is constant loss of water from body. Marine fish conserve the water and loss ion to overcome dehydration of tissue by following ways:

ii.Ionocytes help to expel monovalent anions from body fluids to seawater and divalent cations from faeces.

In case of human hypertonic urine is excreted. This minimizes the water loss from    their body. The filtrate fluid in Bowman's capsule (isotonic) passes through the tubules of nephrones. Then a large amount of water and solutes are reabsorbed during this course.

ADH and regulation of water reasbsorption:

Antidiuretic hormone (ADH) or vasopressin is the hormone released by posterior part of pituitary gland. The main function of ADH is to increase permeability of distal convoluted tubule (DCT) and collecting duct (CD) due to which reabsorption of water increases. There are two conditions to balance water:

1.When a person takes small amount of water:

In this condition large amount of salt is ingested in diet or excessive sweating then solute potential of the body fluids become more negative (Osmotic pressure rises in the blood). The change in the osmotic potential is detected by osmoreceptors in the hypothalamus and carried to the brain. The brain detects such changes in the body and pituitatory gland releases ADH in the blood.

A large amount of water is reabsorbed rapidly from the filtrate into the cortex and medulla and passes back into the blood capillaries to maintain osmotic pressure normal. So that urine becomes highly concentrated and reduced volume of urine is released from kidney. It is generally called anti-diuresis.

2.When a person takes large amount of water:

When a person takes large amount of water or little sweating or extremely low salt intake in diet then the solid potential of the blood becomes less negative. (Osmotic pressure becomes low in blood) This condition is detected by osmoreceptors and carried to the brain. It sends the message to the pituitary gland to inhabit the

In absence of ADH walls of DCT and CD are impermeable to water and less water is reabsorbed as the osmotic pressure of filtrate is normal and large volume of diluted urine is excreted. It is generally called diuresis.

The regulation of water by ADH is an example of homeostatic feedback mechanism.

Other functions of kidney:

1.Regulation of fluid balance: The kidney controls osmotic pressure of extra cellular body fluids by regulating the amount of water lost from body.

4.Removal of other substances like mineral salts, iodides, drugs, arsenic and bacteria are recovered of the blood by kidney only.

5.Kidney secretes rennin which is an enzyme but acts as hormone which changes the plasma protein.

6.Kidney secretes erythropoietin which stimulates the formation of RBC.

1.Barrier against the invasion of microorganism and chemicals

5.Acts as to regulate excretion of some substances

6.Absorption of some substances

7.Sensitivity in response to stimuli

6.Breakdown of erthrocyst and defence.

The regulation or maintenance of a constant body fluid or internal environment is called homeostasis. The temperature, amount of water and glucose concentration are at almost constant in homeostasis. At the temperature of 37 oC enzymes work perfectly, division of cell and metabolism is also perfect.

2.Kidney as homeostatic organ: Kidneys are the chief excretory and osmoregulatory organs. These also play key role in homeostasis. For example, (a) Regulation of water content by ADH (b) Regulation of salt or ion concentration in blood (c) Maintain acid base balance in body (Lactic acid, ketones, sulphuric acid etc) (d) Blood volume is regulated by the kidney

3.Liver as homeostatic organ: Liver is a key homeostatic organ due to the following reasons: (a) Regulation of Carbohydrate, lipid and amino acid metabolism. (b) Regulation of amount of glucose in blood by gluconeogenesis process. (c) It maintains the optimum temperature (d) Liver produces the bile. Bilirubin and Biliverdin, by products of dead RVC are excreted from the liver.

4.Lungs as homeostatic organ: It balances the concentration of O2 and Co2 in blood at the best level for the cells’ chemical reaction.