In multicellular organism various types of glands are found which are grouped as;

They are glands of the exocrine system that secrete their essential product by way of a duct to some environment external to itself, either inside the body or on a surface of the body. Exocrine glands are one of two types of glands in the human body, the other being endocrine glands, which secrete their products directly into the bloodstream. Examples of exocrine glands include the sweat glands, salivary glands, mammary glands, and liver.

A hormone a class of signaling molecules produced by glands in multicellular organisms that are transported by the circulatory system to target distant organs to regulate physiology and behaviour. Hormones have diverse chemical structures that include eicosanoids, steroids, amino acid derivatives, peptides, and proteins. The glands that secrete hormones comprise the endocrine signaling system. The term hormone is sometimes extended to include chemicals produced by cells that affect the same cell (autocrine or intracrine signalling) or nearby cells (paracrine signalling).

In human endocrine glands are found in different parts of the body they are;

It is also called master gland because its hormones control the functions of other gland.

It is located at the base of the brain and enclosed in a depression of bone of skull.

Structure of the pituitary is small about the size of the large pea. It’s weight is about 1gm.it is reddish gray in color and roughly oval in shape.

Hormones of adenohypophysis and their functions:

Stimulate the ovarian follicle to produce eggs in female and spermatogenesis in males.

Stimulate ovulation from progesterone and estrogen in female. In male it activate to secret testosterone hormone.

Stimulates to produce milk in pregnant female from mammary gland.

Control the growth of body.

Hormones of neurohypophysis(posterior lobe) and their functions:

It is also called birth hormone and milk ejection hormone. It affects the contraction uterine wall to give birth of baby and ejection of milk in mammary gland in female.

In male it stimulates the flow of spermatozoa.

Balance amount of the water in the body from distal convoluted tubule and collecting duct of nephrone.

It is located on either side of trachea behind the thyroid cartilage. It has two right and left lobes. 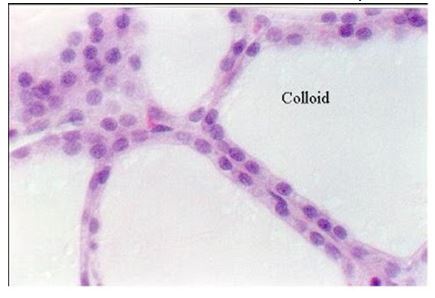 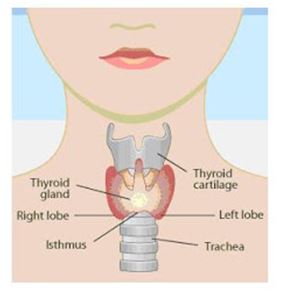 It is the largest endocrine gland. Size is 5x3cm and weight is about 40gm. It as numbers of follicle made up of cubodial cells which secret hormones. Thyroid gland is larger in the female than male.

It produce thyroxin and thyrocalcitonine.

It control the rate of metabolic activities. It is essential for growth.

It regulates metabolism of calcium and phosphorus. It is stimulate by increase in conc. of ca++ in plasma.

These are embedded in the dorsal surface of thyroid gland. Two are located in each thyroid lobe.There are about 4mm in long and 50mg of weight the gland is made up of polygonal cells.

It secrets Parathormone which is control by calcium level in blood. Law calcium causes secretion of parathyroid hormones. Parathormone maintain the metabolism of phosphate and calcium.

Hyposecretion: twitching of muscles and spasm of the body (quick jerky response of muscle) and painful contraction of muscles)(Tetany)

It is located at the top of the kidney. Their structures are small yellowish and highly vasculated. It’s size is 5x3x1cm and weight is 5gm. 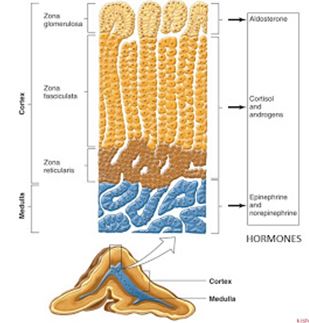 Histological it made up of outer cortex and inner medulla. Cortex has three layers but medulla has no layers.

2.Glucocoticoids: Synthesis of glucose from amino acids and fatty acids(gluconeogenesis) and metabolism of carbohydrates.

weakness of muscles and hypertension.

It is also called emergency hormone and greatly increases in cold emotions and heat. It affects the muscle of heart to contract fast and rise in blood pressure. It is used to stimulate the heart(cardiovascular effect).

It increases metabolic rate and energy in body. It dilates bronchioles. So it uses to treat asthma and allergy. It affects interior portion of pituitary gland to produce hormones.

It increases diastolic and systolic pressure. It is a powerful exciter. 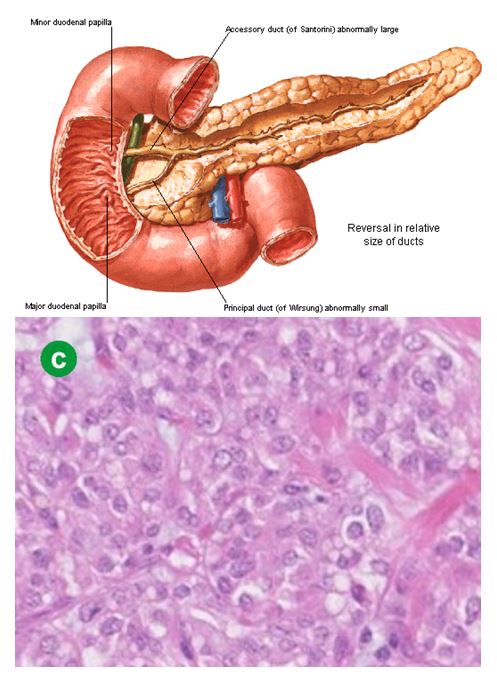 It is located in the curvature of duodenum; it is roughly leaf like structure. It is a heterocrine gland. Endrocrine cells are discovered by Langerhans. Therefore these rae known as islets of langerhans. There are three types of cell in the pancreatic islets.

It is synthesized by β-cells as proinsulin. It changes glucose in the glycogen to store in muscle and liver. Insulin promote protein metabolism.   It is essential for growth.

Glucose level increases from 300 to 200mg/100ml(normal is 95mg/100ml)Amount of protein also increases in tissue.

Glucose level decreases from to as low as 20 t0 30mg/100ml and greatly decrease in protein and tissue.

It is synthesized by α-cells. It consists of 29 amino acids. It is produced during lack of glucose in the blood ( hypopycaemia) and change glycogen into glucose into glucose as required just opposite in hypo and hyper secretion with insulin.

The hormone is secreted by δ-cells. Effect of this hormone is to inhabit the secretion of both insulin and glucagons.

This gland is located in upper chest behind the breast bone.It secret thymosin which converts WBC to T-cells. T-cells play an important role to develop immunity power.

This is also called pineal body. It extends from third ventricle of the brain to from a small cone shaped.The cell of pineal gland (pinealocytes) synthesis the hormone melatonin.

In influences the gonadial functions and other endocrine gland.

There are testis in male and ovaries in females.

1.Testis: Testis cells (cells of ledydig) secret testosterone and dihydrotestosterone on the influence of luteinzing hormone.

Testosterone helps in the development of male accessory gland and secondary sex characters.

a.Graafian follicles: secret oestrogen on the influence of FSH. It helps in the development of secondary six character of female.