Arrhenius theory of ionization consists of the following postulates.

The substances called electrolytes are believed to contain electrically charged particles called ions. These charges are positive for H+ ion or ions derived from metals and negative for the ions derived from non-metals. Number of electrical charges carried by an ion is equal to the valency of corresponding atom.

The number of positive and negative charges on the ions must be equal so that the solution as a whole remains neutral.

In solution, the ions are in a state of disorderly or random motion. Upon colliding they may combine to give unionized molecules. Thus ionization is a reversible process in which the solution contains ions of electrolyte together with unionized molecules.

Ionization is not affected by electric current.

-The electrical conductivity depends upon :

- The number of ions present in the solution
Speed of ions

It states that the mass of the substance deposited or liberated at any electrodes during electrolysis is directly proportional to quantity of charge passed through the electrolyte. 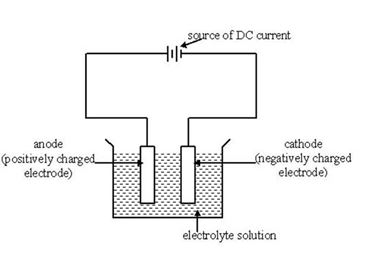 The equation (iii) is the mathematical form of faraday’s first law of electrolysisIt states that the mass of the substance deposited or liberated at any electrodes during electrolysis is directly proportional to quantity of charge passed through the electrolyte.

Where, I = current in ampere. 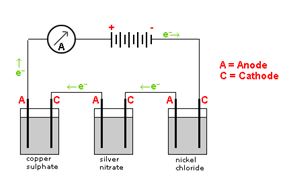 The equation (ii) can be also written as:

This is the verification of 2nd law of electrolysis

Criteria of productformation during electrolysis:

The only ions present are Na+ and Cl-

The products are not the same because water is also involved.

Probable reactions at the cathode

The reduction potential of water is greater so H2 is evolved.

Probable reactions at the anode

The reduction potentials are nearly the same.

Cl2 is preferentially evolved because of

iv) Over voltage of hydrogen. (Extra voltage required for that reaction because it is kinetically slow process.)

Comparing the reduction potentials, the actual reactions are

The actual reactions are

Here, we will see how aqueous solution of common salt conducts electricity. Solid crystalline NaCl is made up of Na+ and Cl- ions bound by a strong force of attraction. The energy required to separate Na+and Cl- ions (i.e., dissociate them) is ~7.9eV per molecule. The thermal energy at room temperature, is only 0.03eV per molecule, and thus cannot dissociate NaCl. However, when NaCl is dissolved in water, the force of attraction is greatly reduced because of the high dielectric constant (= 81) of water. In fact, the force reduces by a factor of 81, and the thermal energy is sufficient to dissociate completely into Na+and Cl- ions. This process is called ionisation.

Electrolyte conductivity is smaller than that of metals by a factor of 10-5 to 10-6 at room temperature. This is due to the smaller number density of ions as compared to free electrons, greater viscosity of the medium in which they move and the larger mass of ions.

It is the reciprocal of specific resistance.

It is the conductance of a solution of 1 cm length having 1 square cm as area of cross section. 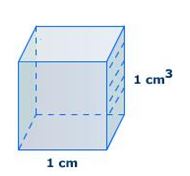 Specific conductance depends upon the concentration of the solution.

V = Volume of solution which has one equivalent in it.

N normality (Number of equivalents per liter or 1000cc)

It is defined as the conductance of 1 cm3 of volume of electrolyte which has one mole dissolved in it.

Variation of conductivity with concentration

The variation is different for strong and weak electrolytes.

It is given according to the equation

Λ mdecreases as the concentration increases. 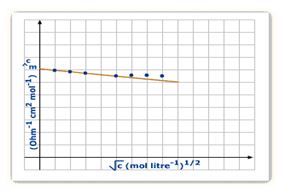 This is because at higher concentration there is greater inter ionic attraction which retards the motion of the ions as conductance falls${\rm{\dag \dag }}\Lambda _{\rm{m}}^{\rm{c}}$and$\Lambda _{\rm{m}}^{\rm{\infty }}$is that conductance at infinite dilution where the ions are far apart and there is no inter-ionic attraction. This can be obtained by extrapolation of the graph to zero concentration.

A weak electrolyte dissociates to a much lesser extent so its conductance is lower than that of a strong electrolyte at the same concentration. 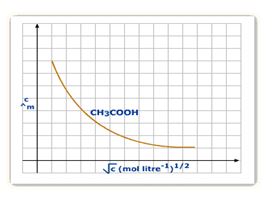 The very large increase at infinite dilution is because the ionization increases and so the number of ions in solution increases.

It is important to understand the development of charges at the electrodes. When a strip of a metal M is placed in a solution of its ions Mn+, a metal - metal ion electrode is obtained. The possible processes that can occur at the electrodes are:

-The metal ion Mn+ collides with the electrode and undergoes no change.

-A metal ion Mn+ collides with the electrode, gains n electrons and gets converted into a metal atom M (i.e., the metal ion is reduced).

It is the potential developed when the pure metal is in contact with its ions at one molar concentration at a temperature of 25oC or 298 K.

Example: When a Zn rod of any length is dipped in 1M ZnSO4 solution, standard electrode is formed and the potential developed is called standard zinc electrode potential (E ° Zn).

The standard zinc electrode is represented as Zn/Zn+2 (1M).

In case of a gas electrode, the standard electrode potential (Eo) is defined as the potential developed at the interface of the gas and solution containing its own ions when an equilibrium is established between the gas at a pressure of 760 mm of Hg and the ions in solution of unit concentration.

When the H2 gas at a pressure of 1atm is bubbled through HCl of 1 M std H2electrode is formed and the potential developed is called standard hydrogen electrode potential (EoH2) whose magnitude is considered to be 0.

The magnitude of the standard electrode potential is independent of temperature since it depends only on the concentration of the ions.

The potential of hydrogen electrode depends upon,

-Concentration of H+ ions in solution.

-Pressure of the hydrogen gas. 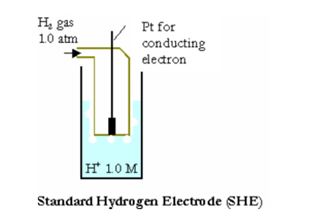 Thus, the potential of an electrode relative to a standard hydrogen electrode at 298 K, and 1 atm pressure when the concentration of the ion taking part in the electrode reaction is 1 mol L-1 is called the standard electrode potential.

Electrochemical series and its applications:

-Prediction of anode and cathode:

-To predict the displacement of elements:

-To calculate the emf of the cell.

-To predict the feasibility of a chemical cell.

A cell having positive emf is feasibility i.e.

(vi) To predict the reducing and oxidizing property:

Spontaneous redox reactions are the metal displacement reactions. Therefore such reactions have been used for producing electricity. This is done by carrying out these reactions in specially designed units called electrochemical cells.

An electrochemical cell is a device used to convert chemical energy of an indirect redox reaction into electrical energy. This is also called Voltaic cell or a Galvanic cell. It is set up by dipping two electrodes (conducting rods) into the same or two different electrolytes. No reaction takes place inside the cell until a conducting wire joins the two electrodes. 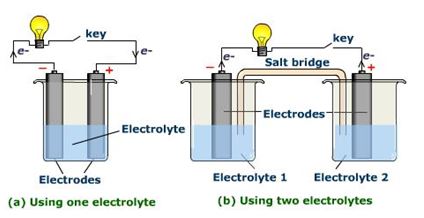 Fig:- An electrochemical cell (a) one electrolyte (b) two electrolytes

A typical metal displacement reaction is the reaction between zinc metal and copper sulphate solution i.e.,

The electrochemical cell based on this reaction is set up as follows.

Zinc sulphate solution is taken in a beaker and a zinc rod is dipped in to it. Similarly copper sulphate solution is taken in another beaker and a copper strip is dipped in to it. An inverted U tube containing concentrated solutions of inert electrolytes such as KCl, KNO3 etc., connects the two solutions. The two openings of the U tube are plugged with porous materials like glass wool or cotton. This U tube is called as salt bridge as it acts like a bridge connecting the solutions of the two beakers. In place of salt bridge, one can also use either a paper strip, unglazed porcelain or clay porous pot or asbestos fibre for developing electrical contact between the two half-cells. When a key is inserted to complete the outer circuit, the following observations are made.

-There is a flow of electrical current through the external circuit.

-The concentration of ZnSO4 solution increases, while that of CuSO4solution decreases.

-The two solutions in the beakers have electrical neutrality.

EMF of electrochemical cell in the standard state:

Where ER and EL represent electrode potential of electrode on right hand side and on the left hand side respectively. It depends upon the nature of the electrodes and the concentration of the solutions in the two half-cells.