The digestive system is a group of organs working together to convert food into energy and basic nutrients to feed the entire body. Food passes through a long tube inside the body known as the alimentary canal or the gastrointestinal tract.

The digestive system consists of alimentary canal and digestive glands. Alimentary canal is complete and has well defined regions. It is concerned with ingestion, digestion, absorption and egestion of waste material. 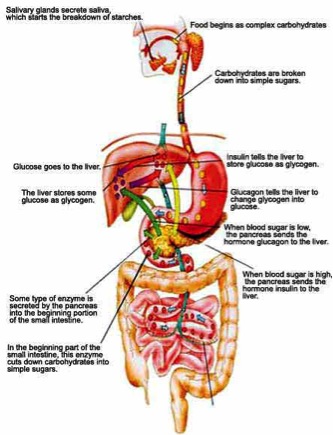 It is a long coiled tube of about 8 to 10 meters long. It is of various diameters at various parts. It starts from mouth and ends in anus. It consists of following parts they are as;

It is a transverse slit like opening bounded by movable upper and lower lip. It opens into a small gap called vestibule. Vestibule is a space between lips and jaw. It opens not buccal cavity.

It is known as oral cavity or mouth cavity also. It is bounded by upper and lower jaws. The upper jaw is fixed and lower jaw is only movable up and down and sidewise. The jaws are provided with teeth in a row. At the floor, there is tongue. The roof of buccal cavity is made by palate. 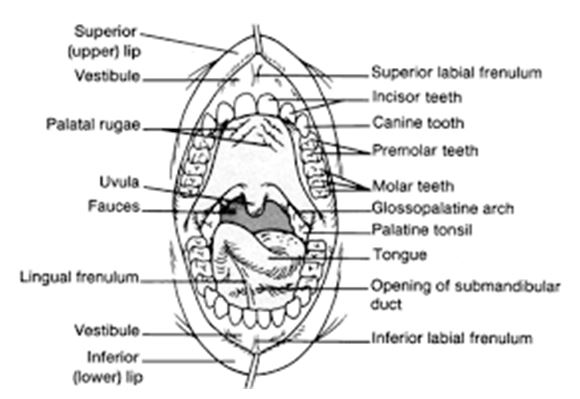 Human beings and most of other mammals are heterodont. They have different types of teeth with different functions.

They are diphyodont. They have two sets of teeth, milk teeth and permanent teeth.

Dental formula – it is expression of number and type of teeth on right or left side (one side) of jaw.

i stands for incisor

the numerator is for number of teeth in upper jaw

the denominator is for number of teeth in lower jaw

milk teeth start to drop out at about age of 5 or 6. the 3rd molar teeth are also known as wisdom teeth and appear at about the age of 17 to 21. teeth in females appear earlier than in males. 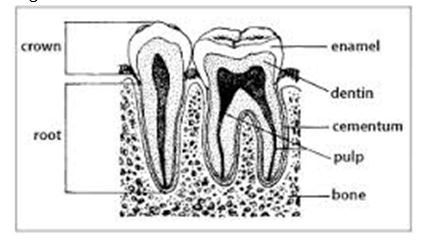 Fig; L.S. of an incisor and a molar tooth.

1.Crown – part which project above gum

Tooth consists of enamel which is the hardest part of human body. It covers the dentine of crown. Dentine has many canaliculi that pass radially from the pulp cavity. Cement covers root of tooth. Periodontal membrane covers cement and fixes tooth in socket (thecodont).

Inside tooth, there is pulp cavity containing mass of cells, blood vessels and nerve constitute pulp. It is for growth of tooth. Dentine forming odontoblast and enamel forming ameloblast cells are also present. 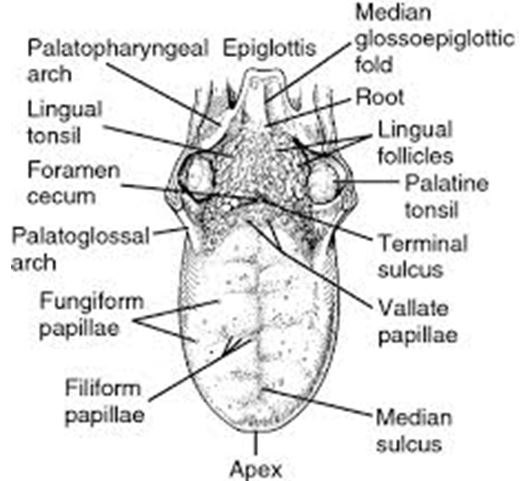 It is highly muscular organ attached at the floor of buccal cavity by a fold called frenulum. The upper surface is provided with numerous papillae containing taste buds. The taste buds are sensitive to taste of food. Types of papillae

2.Fungiform - less in no. red and rounded, found at tip and margin of tongue.

3.Vallate papillae- large in size, about 5 to 12 in no. arranged in inverted v shape at the base of tongue.

4.Foliate – leaf like, not developed in man, found at sides of tongue.

It is wide opining at back of mouth cavity. It leads to two openings : gullet and glottis. There is a muscular flap called epiglottis which closes glottis when food is swallowed. There are 2 openings of internal nares above and two openings of Eustachian tubes at the sides. It is the only part common to digestive and respiratory system.

It is a long narrow muscular tube which connect mouth to stomach. It is about 25 cm long. It pierces diaphragm to open into stomach. It undergoes peristalsis to carry down food and water or fluid.

It is a large muscular elastic bag situated below diaphragm on left side. It has four parts

1.Cardiac: it is so called because it lies near heart. In between oesophagus and cardiac part of stomach there is cardiac sphincter.

2.Fundus: it extends superiorly from the cardiac part. It is usually filled with air.

3.Body: it is main part of stomach.

4.Pyloric part: it is distal part of stomach. it opens into duodenum. It opens and closes several times. At the time of opening, a small amount of partially digested food(chime) is passed into duodenum.

It is divisible into 3 parts.

1.Duodenum – it is c shaped and about 25 cm long. It receives bile juice and pancreatic juice through common bile duct.

3.Ileum – it is about 3.5 meter long. It is highly coiled part. Both jejunum and ileum are suspended by mesenteries. The inner wall of ileum has number of folds called villi. It is mainly for digestion and absorption. 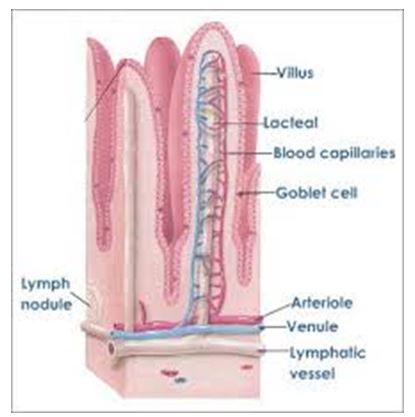 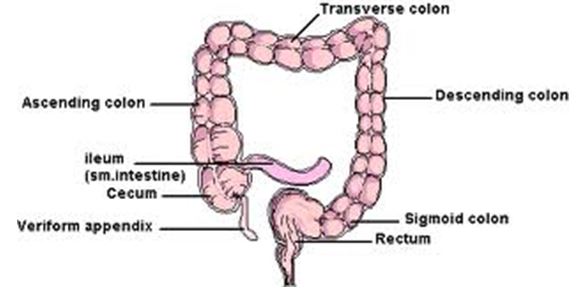 It is about 1.5 meter long and divisible into following parts;

1.Caecum: It is pouch like structure about 6 cm long. There is ileocaecal valve preventing back flow. Attached to caecum is a slender vermiform appendix of about 10 cm long. It is vestigial in man but functional in herbivores. The inflammation of appendix is called appendicitis at the time of infection.

2.Colon: It is inverted U shaped and divisible into

Ascending colon: It is the first part on right side. It moves upward from caecum.

Transverse colon: It is horizontal part.

Descending colon: It moves down at left side. It descends down

Pelvic colon: It is s shaped or sigmoid. Undigested material can remain in colon for about 36 hours.

Colon is for absorption of water mainly.

Rectum: small muscular region, straight, about 15 cm long. It opens to the exterior through anus. Undigested material remains here for a short time. The anus is guarded by 2 sphincters Throughout the alimentary canal, mucous glands secrete mucus.

Associated with digestion, there are following digestive glands which secrete enzymes serving the chemical digestion of food. 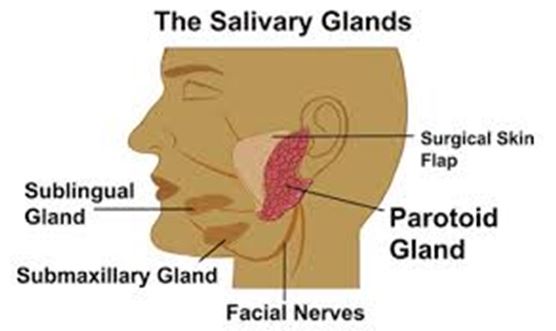 There are three pairs of salivary glands. There is one pair of Parotid gland. It is the largest of the salivary glands. It is situated near the ears. Stenson’s duct of Parotid gland opens near the upper 2nd molar. One pair of sublingual glands is small and situated beneath tongue. Ducts of Rivinus open into floor of oral cavity. One pair of submandibular glands are medium sized and situated at angle of lower jaw. Warten’s duct open near the lower central incisors.
Salivary glands secrete saliva into oral cavity. Saliva is slightly acidic pH 6.8. About 1 to 1.5 Liter of saliva is secreted daily. Saliva contains starch digesting enzyme salivary amylase also called ptyalin.

It is the largest gland. It lies in the upper right side of abdominal cavity just below diaphragm. It is reddish brown and weighs about 1.4 to 1.5 Kg. It has two lobes right and left separated by falciform ligament. The right lobe is further divisible into right lobe proper, quadrate lobe and caudate lobe. Gall bladder is a pear shaped sac like structure. It stores bile juice. The right and left hepatic ducts join to form common hepatic duct. It joins the cystic duct which arises from GB. The cystic duct and other hepatic duct join to form bile duct. It runs down to join the pancreatic duct to form hepatopancreatic duct. It opens into duodenum. The liver lobes are made up of small lobules called hepatic lobules. Hepatic lobules are separated by Glission’s capsule. Liver cells are arranged radially and separated by hepatic sinusoids (wide capillaries). Attached to liver cells there are kupffer’s cells which are phagocytic in nature. 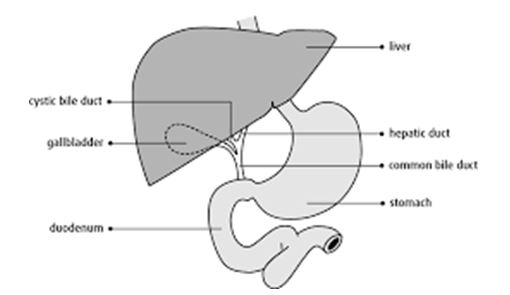 2.Deamination: NH2 amino group is removed from amino acid resulting in the production of ammonia. Ammonia is converted into urea.

3.Glycogenesis: it is conversion of excess glucose into glycogen with the help of insulin.

4.Glycogenolysis:  conversion of glycogen into glucose by liver cells with the help of glucagon.

5.Lipogenesis: conversion of excess glucose and amino acid into fats.

6.Gluconeogenesis: formation of glucose or glycogen from non carbohydrate sources( amino acid, fatty acid and glycerol). It also occurs in kidney and muscle.

9.Destruction of RBC: old and worn out RBC broken down in liver.

10.Synthesis of Blood protein: Prothrombin and fibrinogen are synthesized.

It is soft, lobulated, greenish pink gland. It weighs about 60 grams, 2.5 cm wide and 12 to 15 cm long. It located posterior to stomach. It comprises head, body and tail. Head lies in the curve of duodenum, body behind the stomach and tail reaches the spleen near left kidney. The main pancreatic duct is formed by smaller ducts within pancreas. The main pancreatic duct open into hepatopancreatic ampulla. 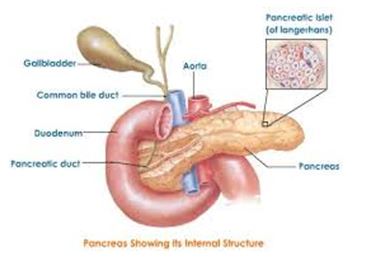 The main objective of digestion is to convert complex food molecules in to simple. Which can easily absorbed by the body cells. This process include ingestion, digestion, absorption, assimilation and egestion or defaecation.

In mouth, the food is mixed with the saliva from salivary gland. Saliva contains the enzyme called salivary amylase. Salivary amylase acts on carbohydrate and changes some of carbohydrate into maltose, isomaltose and limit dextrine. Food remains in mouth for a short time so digestion is not complete.

Pepsin changes inactive prorenin into active rennin. Pepsin acts on protein and changes it into peptones and proteoses. Rennin acts on milk casein. Milk casein is changed into paracasein. Paracasein combines with Calcium ion to form Calcium paracaseinate. It is then acted by pepsin and changed into peptones and proteoses. In the stomach, gastric lipase is also secreted. It acts on fats to change into fatty acids and glycerol.

The partially digested food called chime is passed on to the duodenum slowly. It is mixed with bile juice and pancreatic juice. The bile juice contains bile pigments and bile salts. The pancreatic juice contains enzymes like trypsinogen, amylase and lipase etc. The inactive trypsinogen is converted into active trypsin by enterokinase. Trypsin then acts on protein, peptones and proteoses and change into polypeptides. Amylase acts on starch and changes into maltose. Lipase acts on emulsified fat and change into fatty acids and glycerol.

The functions of bile:

Digestion in jejunum and ileum:

Absorption takes place in the ileum mainly. For this, the internal lining of ileum is provided with large no. of finger like projections called villi. The villi increase the absorptive surface. These are provided with blood vessels and lymph. Glucose, amino acid etc are absorbed into the blood vessel. Blood takes them to liver for storage of glucose. The fatty acids and glycerol come into the lymph which is taken into adipose tissue for storage.

Glucose, fatty acids and glycerol are used for the liberation of energy in the body. Amino acids are used to produce protoplasm in the body for growth and repair of damaged tissue.