It is the process for the formation of gametes in the respective organs.

1. It occurs in the testes.

5. No polar body is formed.

7. Sperms are minute yolkless and motile.

8. It is generally completed in the testes and thus mature sperms are released from the testes.

1. It occurs in the ovaries.

3. A primary oocyte divides to form one secondary oocyte and one polar body.

4. A secondary oocyte divides to form one ootid and one polar body.

6. An oogonium forms one ovum.

7. Ova are much larger often with yolk and nonmotile.

8. It is often completed in the female repro­ductive tract or in many animals in water because oocytes are released from the ovaries.

Embryology is the branch of biology that deals with the development of an embryo from the fertilization of the ovum to the fetus stage. It includes;

The copulation is essential in frogs, in order to provide the maximum possible number of eggs, an opportunity for fertilization within a very short time. The frogs reproduce in monsoon in dim light. Usually when it is raining the male frogs collect near the bank of water pool or ditch. They produce croaking sound with the help of vocal sacs. The vocal sacs act as amplifiers. The croaking is a mating call for the female frogs. The female frogs getting attracted approach the male frogs. The male frog rides over the female frog and embraces it. The male frog holds the female frog firmly by its forelimbs and nuptial pads. The couple remains in this condition for 2-3 days. The Frog takes a long time to become sexually excited, as they are cold-blooded animals and devoid of copulatory organs. The male holds the female more tightly at the state of orgasm. At this stage the female discharges a large number of eggs in water from its ovisac through the cloacal aperture. The male frog right at the same moment discharges its sperms over the eggs falling in water. The two animals separate from each other on completion of this process.

The frog egg is a huge cell; its volume is over 1.6 million times larger than a normal frog cell. During embryonic development, the egg will be converted into a tadpole containing millions of cells but containing the same amount of organic matter.

1.The upper hemisphere of the egg — the animal pole — is dark.

2.The lower hemisphere — the vegetal pole — is light.

3.When deposited in the water and ready for fertilization, the haploid egg is at metaphase of meiosis II

Entrance of the sperm initiates a sequence of events:

2.The cytoplasm of the egg rotates about 30 degrees relative to the poles. 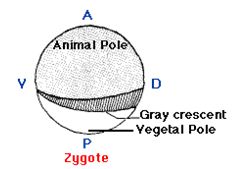 3.In some amphibians (including Xenopus), this is revealed by the appearance of a light-colored band, the gray crescent.

4.The gray crescent forms opposite the point where the sperm entered.

5.It foretells the future pattern of the animal: its dorsal (D) and ventral (V) surfaces; its anterior (A) and posterior (P); its left and right sides.

6.The haploid sperm and egg nuclei fuse to form the diploid zygote nucleus.

The zygote nucleus undergoes a series of mitosis, with the resulting daughter nuclei becoming partitioned off, by  cytokinesis, in separate, and ever-smaller, cells. 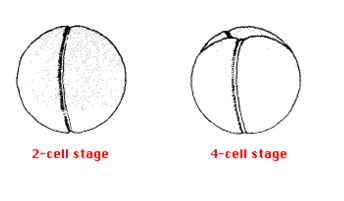 The first cleavage occurs shortly after the zygote nucleus forms.

1.A furrow appears that runs longitudinally through the poles of the egg, passing through the point at which the sperm entered and bisecting the gray crescent.

2.This divides the egg into two halves forming the 2-cell stage

3.The second cleavage forms the 4-cell stage. The cleavage furrow again runs through the poles but at right angles to the first furrow.

4.The furrow in the third cleavage runs horizontally but in a plane closer to the animal than to the vegetal pole. It produces the 8-cell stage.

5.The next few cleavages also proceed in synchrony, producing a 16-cell and then a 32-cell embryo. 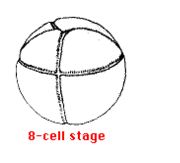 However, as cleavage continues, the cells in the animal pole begin dividing more rapidly than those in the vegetal pole and thus become smaller and more numerous.

By the next day, continued cleavage has produced a hollow ball of thousands of cells called the blastula. A fluid-filled cavity, the blastocoel, forms within it.

During this entire process

There has been no growth of the embryo. In fact, because the cells of the blastula are so small, the blastula looks just like the original egg to the unaided eye.

1.Not until the blastula contains some 4,000 cells is there any transcription of zygote genes. All of the activities up to now have been run by gene products (mRNA and proteins) deposited by the mother when she formed the egg.

The start of gastrulation is marked by the pushing inward ("invagination") of cells in the region of the embryo once occupied by the middle of the gray crescent. This produces:

1.an opening (the blastopore) that will be the future anus

2.a cluster of cells that develops into the Spemann organizer (named after one of the German embryologists who discovered its remarkable inductive properties). 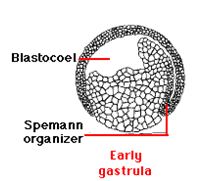 Each of these will have special roles to play in building the complete animal. Some are listed in the table.

2.The layers changes to from different structure (morphogenesis )

After the 32 cell stage, the cleavage is irregular holoblastic because micromeres cells divide faster than the macromere cells. The excessive growth of micromere, slowly and gradually covers macromeres from the outer surface which is similar in the growth of the fruits in the mulberry, new fruits continuously covers the old foods.

The micromeres divide faster than the macromeres due to almost lack of yolk and minute in size. Due to excessive growth of micromeres, a minute cavity is develop which end the morula stage.

After the morula stage, cells enter into the blastula stage. Further growth of the micromeres continue, a minute cavity of the morula stage gradually enlarges into the blastocoels cavity, On the roof of the cavity, possess micromere, at the floor presents macromeres and at the two lateral sides appear chorda mesodermal cells. At the end of the blastula stage form 3 germinal cells such as ectoderm, mesoderm and endoderm in presumptive form.

After blastula enter into the last gastrula stage in which cells of the blastola are reaarange into their respective position with the help of following steps:

c.Contraction of lips and formation of archenteron cavity

c.Contraction of lips and formation of archenteron cavity:

The continuous inward migration of cells sometimes due to the great force, yolk cells comes out of the blastopore called yolk plug formation.

The inward migration of cell develop archentron cavity which slowly enlarges and reduces internal blastocoels cavity. Archenteron cavity is bounded by endodermal cells, in the mean time cells of the mesodermal also slowly develop, meet with each other form complete ring of mesodermal layer. At the end of the glastula stage, blastopore opening constrict, formation of 3 distinctive body layers, maximum enlargement of archenteron cavity and blastocoels cavity is disappear.

After the formation of 3 germinal layers, cells overturn again within the vitalline membrane as a result blastopore opening retain the original position called rotation of blastopore.

Coelom is a body cavity, lies within the body in invertebrates and vertebrates.

Gatrulation is completed in about 30 hours after oviposition. Different tissues and embryonic organs are formed from the three primary germ layers.

1.Notochord develop from the mesodermal layer of archenteron.

3.Cells of roof arechenteron become vaculated and a sheath is formed around

4.Later the notochord is replaced by vertebral column. 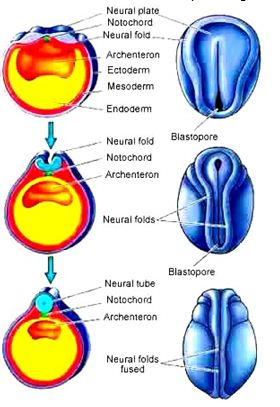 1.By the end of gatrulation, the neural palte appers plate appers by thickening of

3.Neural plate sink downward to from a neural groove. The folds joim and neur

7.From neuropore to the previous but now closed blastospore from a cannal

which is called neuroentric cannal.

8.Anterior borad end of neural tube modifies into brain and the neural tub

1.Coelom is formed by mesoderm.

somatic mesoderm ( below the skin ) and an inner visceral or splanchnic

endoderm is formed around the wall of archenteron.

3.The cavity thus formed between the layer is called splanchno coel (future

4.Splanchnocoel extended downward below the gust to apper v-shaped in section.

5.Visceral layer (which cover viscera or different organs) united with endoderm to

form the get wall or splanchnopleure. C. wall of oesophagus intestine rectum etc. 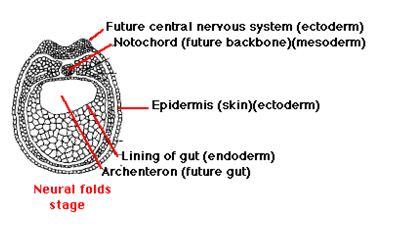