# Usually earthworm is widely distributed in fertile or loam soil which burrow at the depth of about 6″ inches.

# During dry season. It can grow at the depth pf 1m but during rainy season, found on the soil surface.

# Earthworm is commonly called friend of farmer or natural plough.

# the distribution of earthworm is almost cosmopolitan found from the sea level up to the altitude of 3000m.

1. Long, cylindrical, almost pointed at the both ends, metamerically segmented.

2. Number of segment varies between 100-120, each segment is also called somite or metamere and divisible into dorsal, ventral, anterior and posterior regions.

3. Dorsal portion is dark in colour due to deposition of skin pigment called Porphyrin.

4. Anterior portion is very close to clittellum and posterior region is far from the clittellum.

It includes Digestive tract or Alimentary canal or Gut.

It completes from anterior mouth or prostomium up to posterior anus includes buccal cavity pharynx, oesophagus, stomach and intestine.

The mouth is highly elastic can protrude out and protrude in surrounded by 1st body segment acting as lips called peristomium. Mouth follows short buccal cavity lies within 2nd and 3rd body segments.Buccal cavity is divisible into upper semi circular dorsal chamber. When this chamber gets extended size of buccal cavity becomes larger.

Buccal cavity follows another short phyarynx lies in the 4th,5th, and 6th segments of the body marked by pharyngeal mass on the dorsal pharynx. This mass secrete saliva or mucin and proteolytic enzyme. Due to heavy pharyngeal mass, pharynx is also depressed into upper, dorsal and lower ventral chambers separated by horizontal shelve. The wall of the dorsal chamber has ciliated epithillium cells which produces ciliatary current help in the collecton of enzyme. The collected saliva and enzyme 1st diffuse into dorsal chamber. So it is also called salivary chamber.

Pharynx follows short oesophagus in 7th, 8th segment of the body. In the 8th or 8/9th segment modifies into hard and oval gizzard surrounded by numerous circular muscles. The internal wall is also covered by hard cuticle layer. The contraction and relaxation of circular muscles easily masticate food and soil. Thus acting as grinding organ.

Stomach follows the longest portion of the alimentary canal intestine extending from 15th to last but one segment of the body. It has large diameter and looks brownish in colouration.

Structurally and functionally intestine is divisible into three regions;

At last post-typhlosolar region opens to posterior anus through which release out food waste and soil particles in the form of castings.

PHYSIOLOGY OF DIGESTION: The physiology of digestion includes ingestion, digestion,absorption and egestion. If the food is green, first of all take into their burrow then mix with mucins secreted by the skin which makes colourless food after that including other foods with soil ingest through mouth follows buccal cavity and pharynx.

Gizzard: In gizzard, completely powdered making more easy. The main significant of ingesting soil is only to produce more friction during breaking down of food.

Stomach:In stomach ones more protein is partially digest as in the pharynx.In the pre-typhlosolar region, food is completely digested as follows;Enzymes from the wall of the intestine.

a) Enzyme trypase – react upon protein which convert into peptones and finally digest into amino acid.

b) Enzyme lipase – react upon fat acid which convert into fatty acid and glycerol.

c) Enzyme amylase – react upon carbohydrate convert into sugar and finally into glucose or fuctose.

Nephridia: Nephridia are the excretory organ of earthworm which are very minute, coiled, eliminate waste either outside the skin or into the alimentary canal.On the basis of structure and position, nephridia is of following types:-

1. Integumentary Nephridia – in the skin

2. Pharyngeal Nephridia- only in the pharynx

3. Septal or Intentine or typical Nephridia – only in the intestine

On the basis of elimination

In the pharynx good mix with saliva and treat by proteolytic enzyme which partially digest protein into peptones or peptides, therefore process of digestion start from the pharynx.

The nephridia are very minute, coiled attached directly in the skin distributed from second segment upto last but one segment. Each segment has the numbers 200-250 but in the clitellum region has 2000-2500 numbers. Single nephridium does not possess mouth or nephrostone, eliminate nitrogen waste directly outside the skin. Thus, it is exo-nephric nephridium.

They are only found in the pharynx i.e. in 4th, 5th and 6th segments.

In each segment, number of nephridia varies between 80-100 i.e each septum possess 40-50 in number. Each septal nephridium consists of mouth and main body. Mouth is ciliated produces ciliary current which help in the selection of nitrogen waste in the body coelomic fluid. Mouth or nephrostom connected to terminal duct due to short neck. 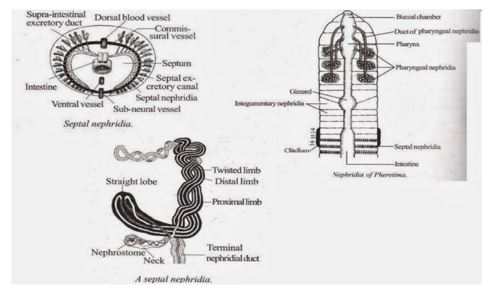 Earthworm is a hermaphrodite animal because male and female reproductive organs are both found in the single animal even then there is no self fertilization always cross fertilization because of protandrous character.

2. Two pairs of seminal vesicles lies in the 11th and 12 th segment.

8. Two pairs of accessory glands each pair in 17th and 19th segments.

5. Two pairs of spermaducal funnels in 11th and 12th segments.

Beside these male organs also possess two pairs of accessory glands. Each pair is 17th and 19th segment serve as adhesive organs because their secretion help during copulation.

Primary sex ovary is locate in 13th septum possess finger like projections containing different stages of eggs. Eggs within the ovary develop by oogenesis process. At maturation wall of the ovary rupture release eggs in the body cavity which are collect by 1 pair of oviducal funnel of 13th segment. It follows oviduct in 13th, 14th segments and opens commonly in the 14th segments as female genital opening.

There are four pairs of spermathecae, each pair lies in the 6th, 7th, 8th and 9th segments. Each spermathecae has larger sac ampulla for nourishment and small sac diverticulum which restore sperms collected at the time of copulation. Spermatica although related with the collection of sperm even then kept in the female reproductive organs because of receiver bag. 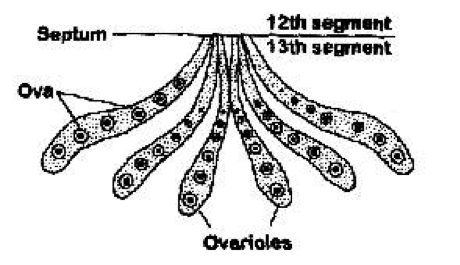 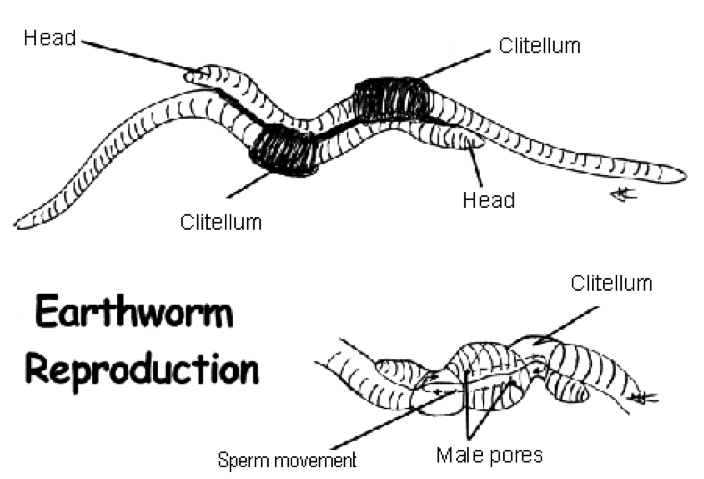 During breeding season or rainy season at night earthworms come out from their burrows on the surface, they select their partners by themselves and temporary fuses in ventral to ventral position in head to tail arrangement. After the fusion, common ducts of one penetrate into the one pair of spermathecal of the other. After that deposit sperm in the diverticulum. Hence the main significance of copulation is to exchange sperm in between the two animals. Ater completion, copulation ended i.e separated. For the temporary fusion, accessory glands secrete adhesive fluid.

Cocoon formation: After copulation, earthworm moves into their own burrows. In the burrow, glanular cells of the clitellum become very active whose secretion form a tight sac around the clitellum called clitellar sac. After that earthworm’s body withdraws backward. As a result, sac collects eggs from 14th opening and sperms from spermathecal openings, at last comes out of the anterior region in barrel shape called cocoon. 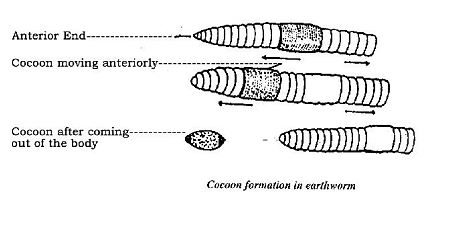 Fertilization: Fertilization is external although takes place inside the cocoon which converts into zygote. After few hours, zygote undergoes cleavage give directly young ones. Therefore, the development is direct. 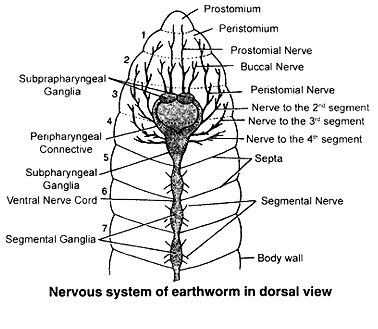 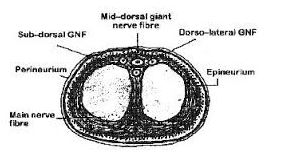 2. Peripheral Nervous System:It is related with nerve fibrous of the ganglia.It includes nerve fibers or nerve, which arises from central nervous system.

- From cerebral ganglia, 8-10 nerves arise and supply to prostomium, buccal chamber, and pharynx.

- From circumpharyngeal connectives, two pairs of nerves arise and supply to 1st and 2nd segment.

- From subpharyangeal ganglia, three pairs of nerve arise and supply to 2nd, 3rd and 4th segment.

- From each segmental ganglion, three pairs of nerves arise and supply to respective segment.

3.Autonomic Nervous System: It is primitive form because of lower invertebrate animal.

3. Conversion of stimuli into messages.

4. Conduction of messages towards affective region.

- It makes the burrow in soil. This is useful for plants and they can grow easily.

- They can be used as food.

-They are used as medicines to cure stone in bladder, jaundice etc.

- They can be used as baits for fishing.

- There are used in laboratory for research.

- They can damage plants in garden.