The term wild life generally refers to those organisms that live in their natural habitat. And the term conservation means the protection of nature and natural resources for future generation by using it sustainably.

Economic value: Wildlife resources are the main resource on which human beings depend. It provides various raw materials for textile, leather,tannis, dyes, timber, and furniture for the industries and people can earn money by selling them. From animals fur, wool, horn, bone, silk, meat, leather etc can be produced and by selling them money can be earned.

Food Value: It provides the vast majority of foodstuffs. Many kinds of animals and plants are lived and grow in different climate and geographical conditions. These plants and animals supply lots of food products such as fruits, cereals, nuts, mushroom, honey, meat, mike etc.

Medicinal value: It is estimated that 80% of people in the developing world depend directly on traditional medicines derived from plants and animals. More than 1500 plants of Nepal have medicinal value.

Other value: Biological diversity exerts direct influences on regional and local weather patterns. Plant purifies the air and regulates the composition of the atmosphere, recycling oxygen and filtering harmful particles release due to industrial activities.

Following species are placed in a threat species by IUCN (International union of conservation of nature and natural resources).

Extinct (Ex): species not definitely located in wild during the past 50 years. On a few occasions, the category Ex? Is used; this donates that it is virtually certain that the taxon has recently become extinct.

Endangered (E): Taxa in danger of extinction and whose survival is unlikely if the casual factors continue to operate. Also included are taxa that may now be extinct although they have been seen in the wild in the past 50 years, e.g. Talauma hodgsonii.

Vulnerable (V): Taxa believed likely to move into the endangered category in the near future if the casual factors continue operating. Included are taxa of which most or all the populations are decreasing because of over-exploitation, e.g. Nardostachys grandiflora, Paris ployphylla etc.

Rare (R): Taxa with small world populations that are not present endangered or vulnerable but are at risk. These species are usually localized within restricted geographical regions or habitats.

Indeterminate (I): Taxa known to be endangered, vulnerable or rare but where there is not enough information to say which of the three categories is appropriate.

Insufficiently known (K): Taxa that are suspected but not definitely known to belong to any of the above categories, because of lack of information.

Threatened (T): The general term threatened is used to refer to a species considered to belong to any one of the above categories.

Commercially threatened (CT):Taxa not currently threatened with extinction, but most or all of whose population are threatened as a sustainable commercial resource or will become so.

There are total 27 mammals endangered in Nepal. Here are name list of endangered mammals in Nepal.

There are 9 bird species in endanger.

There are total 3 reptiles endangered in Nepal. Here are name list of endangered Reptiles in Nepal.

a. Habitat loss, forest destruction and degradation: In Nepal the greatest threat to the conservation of wildlife comes from the activities of man which include habitat loss and forest destruction. The destroying habitat of wild life by overpopulation for commercial timbering, cropland, industries, road ways, canal developmental activities, for fuel wood, power plants cause wildlife extinction.

b. Over-exploitation of forest resources: People to large extent depend on forest resources for their sustenance. People use forest products for fulewood, fodder, timber, shelter, medicine and food plants which increase the extinction of wild life.

d. Trade: There has been commercial trade of wild flora and fauna both legally and illegally. One of example is one-horned rhinoceros which is in decreasing amount due to trading.

e. The population growth and poverty is also the main cause of wild life extinction.

Conservation and management of wildlife

- The habitat study, protection, improvement and habitat management should be done.

- The habitat of wildlife should be increased.

- Population growth rate should be decreased.

- The data about the wildlife should be refreshed and should collect in regular interval.

- The laws in the field of trade and hunting of wild life should make tight and fine amount should be high.

- Education, and public awareness should be done.

- Scientific researches should be done and the threatened species should get priority in order to conserve them.

Many national and international agencies are engaged for the purpose of conservation of wildlife in Nepal.

IUCN (International union for conservation of nature and natural resources):

It was founded in1948. It brings together states, government agencies and diverse range of non-governmental organizations in a unique world partnership: some 865 members in all, spared across 133 countries.

WWF is the world’s largest private international conservation organization with 28 assiliate and associate national organizations around the world. WWF aims to conserve natural and ecological processes by: (a) preserving genetic, species and ecosystem diversity; (b) ensuring that the use of renewable natural resources is sustainable both now and in longer term and (c) promoting actions to reduce pollution and wasteful exploitation and consumption of resources.

WHO (The World Health Organization):

The world health organization is a specialized agency of the united nations established in 1948 with primary responsibility for international health matters and public health.

National parks: It is an area set aside for the conservation and management of the natural environment including ecological, faunal, floral, geomorphological associations of scientific and aesthetic importance. 8 national parks are in Nepal. 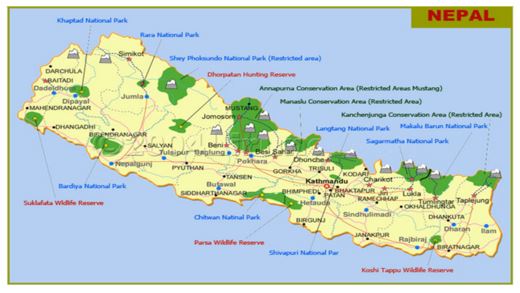 1. Chitwan National Parks: It is the oldest national park of Nepal and covers 932 km2 areas. It is declared as national parks in 1973. It is also placed in world heritage site. It comprises a complex ecosystem of Churia hills, ox-bow lakes and flood plains of Rapti, Reu and Narayani rivers.

2. Langtang National Park:  It is situated in the north of central Nepal and is the nearest park to Kathmandu. It comprises 1710 sq. km. The park is the home of several ethnic groups.

3. Sagarmatha National park: Sagarmatha national parks lie in the solokhumbu district of the north-eastern region of Nepal and cover an area of 1,148 sq. km. It is established in 1976 and declared as world heritage site in 1979.

4. Rara National park: Rara national park is located in North-west Nepal. The park lies in Mugu and Jumla districts in the mid weastern Nepal. This is the smallest park in Nepal covering 106 sq. km. It is established in 1976.

5. Shey- Phoksundo National park: It is situated in the mountain region of Dolpa and Mugu district of north-west Nepal. It is the largest park in the country with an area of 3,555 sq. km. The area around shey and phoksundo lake was first purpose as a wildlife reserve in 1974 and in 1984 a very large area around that is declared as national park.

6. Khaptad National park: The khaptad national park is located in the mid-mountain region of far-western Nepal. It was established in 1984 and it covers area of 225 sq. km.

7. Bardia National park: Bardia national park is situated in Bardia district in the middle far-western terai. The park which covers an area of 968 sq. km. it is established in 1969.

8. Makalu_Barun National park: It lies in the solukhumbu and sankhuwasabha districts of eastern Nepal. It was established in 1991.

Sanctuary: It is an area where the trapping and killing of animal is prohibited except under order of the authorities.

Wildlife Reserve: it constitutes the areas for the conservation and management of wildlife resources and their habitats.

Hunting Reserve: It is an area set aside for conservation and management of wildlife to provide sport hunting for legal hunters.

Conservation Area:Conservation area is an area managed in accordance with an integrated plan for the conservation of the natural environment and the sustainable use of natural resources.

Buffer Zone: It is an area designated surrounding national parks and reserves in order to provide facilities for the use of forests products on a regular absis to the local people.