Chemical Bonding and Shape of Molecules

The structures of different molecules can be explained on the basis of hybridization. For e.g., in case of carbon, the ground state electronic configuration is 1s2 2s2 2p1x 1y

To explain the tetravalency of carbon, it was proposed that one of the electrons from 2s filled orbital is promoted to the 2p empty orbital (2pz), which is in a higher energy state. Thus, four half-filled orbitals form in the valence shell this accounts for the bonding capacity of four carbon atoms. This state is known as excited state and the configuration of carbon in the excited state is:

But actually, in most of the carbon compounds, such as methane (CH4), carbon tetrachloride (CCl4) etc., all the four bonds of carbon atom are equivalent. The equivalent character of the bonds can be explained with the help of hybridization.

The important characteristics of hybridization are listed below:

(ii) The hybridized orbitals are always equivalent in energy and shape.

(iii) The hybrid orbitals are more effective in forming stable bonds than the pure atomic orbitals.

(iv)The hybrid orbitals are directed in space in some preferred directions to have stable arrangements.

Therefore, the type of hybridization gives the geometry of the molecule. Depending upon the different combinations of s- and three p-orbitals, three types of hybridizations are known.

In this case, one s- and three p-orbitals hybridize to form four sp3 hybrid orbitals. These four sp3-hybrid orbitals are oriented in a tetrahedral arrangement. The common example of molecule involving sp3-hybridisation is methane (CH4). Therefore, CH4 has tetrahedral geometry and HCH bond angle is 109.5o.

When the overlap of orbital’s of two atoms takes place along the line joining the two nuclei (orbital axis) then the covalent bond formed is called sigma (s) bond. These bonds can be formed due to’s-s', 's-p' or 'p-p' overlap along the orbital axis. Free rotation around a sigma bond is always possible. 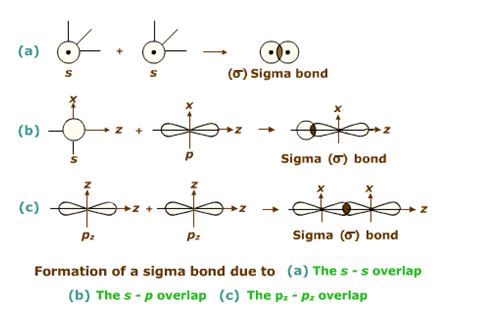 When the two atoms overlap due to the sideways overlap of their 'p' orbitals, the covalent bond is called as pi(p) bond. In a pi bond the electron density is concentrated in the region perpendicular to the bond axis.

Characteristics of the pi (p) bonds

-The pi bonds are weak because the orbtial overlap is partial.

-For a complete sideways overlap the 'p' orbitals should be parallel to each other. This is possible when all the atoms of the molecule are in the same plane i.e., there is no rotation of one part of the molecule relative to the other about the pi (p) bond. 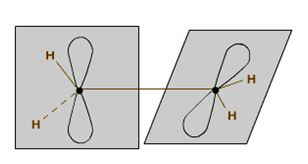 The electrons in the pi (p) bond are placed above and below the plane of the bonding atoms and so they are more exposed. They are more susceptible to attack by electron seeking or oxidizing agents. Hence, they are the most reactive centers in unsaturated (multiple bonded) compounds.

The VSEPR theory, proposed by R.J.Gillespie and R.S. Nyholmm in 1957, is based on the repulsions between the electron-pairs in the valence-shell of the atoms in the molecule. It was developed to predict the shapes of the molecules in which the atoms are bonded together with single bonds only.

The main postulates of VSEPR theory are:

2. In order to minimize the repulsion forces between them, electron pairs around the      molecules central atom, tend to stay as far away from each other as possible

The strength of repulsions between different electron pairs follows the order:

Prediction of molecular geometry on the basis of VSEPR theory:

Molecule with two bond pairs: In a molecule having two bond pairs of electrons around its central atom, the bond pairs are located on the opposite sides (at an angle of 180o) so that the repulsion between them is minimum. Such molecules are therefore linear. Some molecules, which show linear geometry are: BeF2 (beryllium fluoride), BeCl2(beryllium chloride), BeH2 (beryllium hydride), ZnCl2 (zinc chloride), and HgCl2(mercuric chloride)

borontrifluoride is a trigonal planar molecule 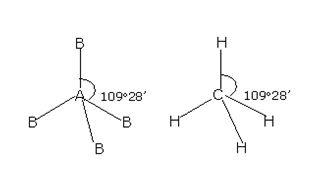 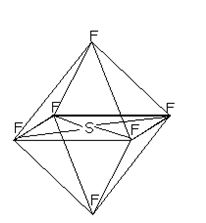 AB6 type molecules are octahedral in shape. SF6 molecule has an

The four electron pairs (two bond pairs + two lone pairs) are distributed tetrahedrally around the central atom as shown below. The two lone pairs on the central atom repel the bond pair slightly inwards due to greater lone pair-bond pair repulsion. As a result, the bond angle in such a molecule is less than the tetrahedral value of 109°28'. The presence of only two bonds in the molecules gives a bent (V-shaped) structure.

The four bond pairs are distributed in a planar distribution. The two lone pairs are in a direction at right angles to this plane. This gives a square planar shape to such molecules.