All living organisms show some kind of reaction to the external environment. The reaction may be visible or automatic expression in response to stimuli. Stimuli may be chemical, physical or external substance, i.e. light, heat, radiation, sound, touch, gravity etc. The expression of organisms in response to the external environment is called behavior. The study of the behavior is called ethology.

1. Innate or stereotyped behavior: This type of behavior includes inherited mechanisms with which animals face the environment. The innate behavior is migration, leadership, mating, dominance etc. it is genetic behavior so it can be transmitted though generation to generation.

The quick or immediate response toward stimulus is called reflex action. This is automatic or involuntary action. The reflex action is also known as automatic response. In this response only a part of body is involved at a given time. It was first studied by Marshall Hall in 1883. There are many example of reflex action in human body, i.e. the blinking of eye, sneezing, hunger etc.In such actions, the impulses are carried by the sensory fibers from the receptor organ to the brain and back to the effector organ. The path or the route through which the impulses travel from the receptor is called a reflex arc.

i. Sensory nerves- from receptor to the brain.

The center of reflex action is spinal cord. And it is controlled by central nervous system. 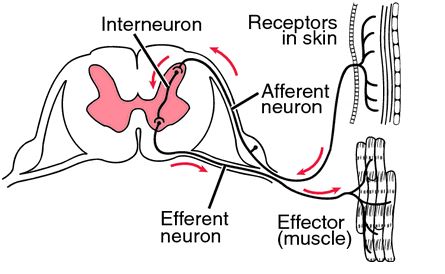 Taxes is defined as the movement or orientation of organism in response to external stimulus.

Taxes is the movement of an organism in response to a stimulus such as light or the presence of food. Taxes are innatebehavioral responses. A taxis differs from a tropism (turning response, often growth towards or away from a stimulus) in that the organism has motility and demonstrates guided movement towards or away from the stimulus source. It is sometimes distinguished from a kinesis, a non-directional change in activity in response to a stimulus.

Thermotaxis: It is the moment of organism in response to the temperature, e.g. earthworm.

Phototaxis:  It is the moment of organism in response to the. For example, the cockroach and earthworm go away from the light. The euglena move towards light. There is of two kind taxis, i.e. positive and negative phototaxis.

Geotaxis: It is the moment of organism in response to the gravity is called geotaxis. Earthworm moves deep into the soil.

Rheotaxis: It is the moment of organism in response to the water current. Movement of fishes towards the current of water.

Chemotaxis: It is the moment of organism in response to the chemicals. The mosquitos fly away from the burning coil or chemical liquid.

Klinotaxis: In some organism the receptor cells are distributed on body surface, mostly on dorsal surface of anterior part. They try to orient their body by bending first on one direction and then other which continues until the receptor of two sides is equally stimulated. For e.g. Euglena.

Tropotaxis: It is the moment of body in response to a stimulus is straight, not sideways like klinotaxis due to presence of receptor organs in pair. for e.g. Lice and ticks.

Telotaxis: The movement animals towards any one of stimulus when they are stimulated by two sources of stimuli. The honey bee moves to flowers in presence of light and in evening she left flowers and moves to hives.

Menotaxis: The animals move their body in response to stimulus at a constant angle.

Mnemotaxis: Some animals move their body towards complex stimuli. E.g. the returning of ant through the same way they travelled earlier.

Leadership:Generally leadership generally refers to the capacity of the member of a particular group by a certain member. The property of giving guidance, control, and security to other members is called leadership. The leadership requires a Leader and leader can be one individual or group. A real leader will be the one who initiates, stabilizes, or integrates the group. It is found in socially organized animals. The ants, bees, birds, mammals, monkeys, dear etc. show this property.

The migration generally refers to the periodic passing of animal form one place for different purpose. The movement of fishes from one place to another place for food, shelter, breeding, or protection is called migratory behavior of fishes. And mainly for reproduction and feeding.

A migratory fish can show (a) Drifting movement (Fish are carried by water current) (b) Random Locomotory movements (Fish move from a point in a uniform environment and spread out so called dispersal.) (c) Orientated swimming movements (d) Dentant and Contranatant movements (movement of fish in relation to water current.)

Types of Migration in fishes:

A) Diadromous Migration: These are truly migratory fish which migrate from fresh water to sea water and from sea to fresh water.

B) Potamodromous: Whose migration towards fresh water, e.g. Carps.

E) Vertical migration: Migration from surface to the depths for food.

1. Due to migration fish could get safe shelter and enough food.

Migratory Behavior of Birds:The movement of birds from one place to another place for food, shelter, breeding, or protection is called migratory behavior of birds. Birds migrate mainly to survive from extreme environment. The species of birds show periodic movement between their summer and winter homes.

1. Latitudinal Migration: The migration of birds from north to south or vice versa is called latitudinal migration.

2. Longitudinal Migration: The migration of bird from east to west or vice versa is called longitudinal migration.

3. Altitudinal Migration: The migration of bird from higher altitude to lower altitude or vice versa is called altitudinal migration. Some birds pass the summer in the mountains regions but return to the lowlands in winter.

4. Seasonal Migration: The migration of birds during season.

5. Irregular or Vagrant migration: Bird leaves their home and disperses in different direction

Modes of flight in migration:

2. Routes of migration: Some migratory birds follow definite routs and fly-ways year after year. During flight they make some landmark such as mountains, rivers, stars, sun etc. and some learn their routes from their parent.

4. Speed and duration of flight: The birds normally fly about 6-7 hour a day and fly at the seed of 30-80 km per hour. In some suitable places they take rest for food.

1. Due to change in environmental condition and sacristy of food.

2. Due to metabolic stimulus.

3. Due to the physiological change occur in bird.

4. Due to the occurrence of hormones such as Antipituitary hormone and thyroid hormone.

1. Due to migration birds could get safe shelter and enough food.

3. They can enjoy warmer climatic condition throughout whole life.

1. Some birds lose their way during flight.

2. They are also killed by predators such as hawks during migration.

3. They can be died due to sudden change in environment.

Body Contour: the head, body and tail are compressed, stream-lined.

Locomotory organ:Fins are present in the body; Tail is present for change in direction.

Swim Bladder: it is a hollow organ filled with air or gas.

Respiration By gills: It is the main adaptation feature which utilizes dissolve oxygen.

Lateral fin system: it helps to detect pressure changes in surrounding and maintain the body according to the water current.

Skin and scales: Mucus gland present and this protects body from external injuries.

Presence of nictitating membrane: it is present on eyes which protects from dirty water and ensure vision.

Osmoregulation: The control of water current and salt concentration is called osmoregulation.

Skeleton: The bones of secondary aquatic forms are light and hollow.

Shortening of neck: they bear short neck which helps the animal to be in balance and to swim in the water easily.

Integument: They are characterized by the loss of armor, hair and skin glands.

Submergence: They all have capacities to swim under water.

Adaptation for living in water:

Body contour: The body is compact; boat shaped which offers least resistance during swimming and diving.

Respiration: They show cutaneous respiration in water but use gills in larvae stage.

Adaptation for living in land:The toads the terrestrial than frogs.

They have two pairs of limbs for walking or swimming and leaping.

The skeleton system is large and bony.

Respiration is takes place by lungs and skin.

The tongue is sticky and protrussible.

Terrestrial adaptation:  It is of two types:

1. Arboreal Adaptations: These are tree living animals and lead arboreal mode of life.

Wall and rock climbers: They provide with calws and adhesive discs in their limbs, e.g. Lizards.

Terrestrio-arboreal forms: They usually nest on the trees and make periodical visits to the ground, e.g. sloth bear, rodents.

Stout body: They have stout and laterally compressed body.

Strong chest and ribs: The strengthening of the chest, ribs and limbs girdles.

Strong girdle bones: In the pelvic gridle the ilium is very broad and it serves to support the viscera.

Grasping type of feet: Feet are prehensile or non-prehensile.

Dry skin: The body is usually covered with dry skin provided with scales.

Presence of neck: It provides mobility to the head, which enhances the efficiency of eyes.

Claws: The digits have sharp and well developed claws in arboreal animals.

a) Active Flight: It has long and sustained flight through air. It seen in birds, insects and bats.

Wings: The fore limbs are modified into wings which help for the flight.

Reduction in body weight: The bones are hollow and many air sacs are present inside.

Presence of neck and beak: The neck is highly mobile and mouth produced into beak.

Bipedal locomotion: The hind limbs are modified for walking.

Broad sternum: It is broad, longitudinal ventral keel for attachment of flight muscle.

Short tail: The tail is used for the balancing during flight.

Development of patagia: Patagium is a fold of skin present between forelimbs and hind limbs.

Webbed Feet: The webbed feet helps in long leaps aming the tree. It serves to increase the area of the supporting column of air.

Human responsibility for the protection of Earth:

Nature is the source of supporting life. It must be kept balanced for which human beings must try to follow and understand their responsibilities. Some of the responsibilities are: -

2. Wildlife especially endangered species must be kept preserved by protecting habitat of wildlife.

3. Indiscriminate cutting of forest trees should be checked and hunting should be stopped. Afforestation programs should be encouraged.

4. Air, land, water or noise must be avoided and make the environment free of pollution.  Use of pesticides should be discouraged.

6. Must aware the people to follow the family planning strategies and make better hygienic conditions.

Natural resources occur naturally within environments that exist relatively undisturbed by humanity, in a natural form. Natural resources are derived from the environment. Some of them are essential for our survival while most are used for satisfying our needs. The survival of living organisms depends upon these resources.

The natural resources can be classified into:

1. Inexhaustible resources: those resources those are not likely to be exhausted by man’s activity.

2. Exhaustible resources: Those resources those are likely to be exhausted by man’s activity. They are further classified into: